Seeing if the improvement claims from manufacturers really hold up!

Up to this point we have always placed two competitors in the ring who have showed similar qualities but from different manufactures. We have yet to see two guns from the same manufacturer let alone the same product line. But for this matchup we wanted to do something a little different. Since manufactures come out with new and updated versions of some of their most popular models we decided to take a look and see if “new and improved” really does mean new and improved.

In the blue corner, weighing in at 9.4 lbs scoped, we have the.22 caliber Benjamin Trail NP1 in a Realtree APG camo stock. The Trail NP1 was one of the first gas piston break barrels to take hold in the market and as such has become a staple in the air gun world. The NP1 makes a great backyard rifle and is a good option for taking small game and pests. Though it has got some criticism for it’s trigger and weight, the Benjamin NP1 has been a solid seller since almost day one.

In the red corner, weighing in at 8.7 lbs scoped, the younger brother of the NP1, it’s the Benjamin Trail NP2 in Realtree Xtra Camo Stock. The Tail NP2 was supposed to tackle many of the grievances that customers had with the Trail NP1. The NP2 along with being lighter, is supposed to produce more power and have a better trigger, of course we are going to test just that. The NP2 was plagued by some early quality control issues and many of the guns had to be sent back to Benjamin for replacement, but it seems that those issues have been cleared up and the Trail NP2 is ready to square off with big brother. Lets get ’em into the ring!

Both the Trail NP1 and NP2 feature an ambidextrous thumb-hole stock. Both are available in wood and synthetic versions and as mentioned, for this test we are going to be looking at the synthetic versions both in Realtree camouflage patterns. The Trail NP1 stock is very rounded and smooth making it comfortable to hold with no sharp edges. The pistol grip and for-end do feature a fairly aggressive stippling pattern to help you get a good grip on the rifle. I found the cheek weld on the Trail NP1 to be a bit low which made getting a comfortable sight picture a bit tricky. I also found the thumb-hole grip a bit small for my large hands but your mileage may vary. The flat for-end provides a nice stable platform for your support hand making shooting off hand comfortable. I did find the trigger guard to be a bit crowded and could see shooters who either like to use shooting gloves or who may be shooting in cold weather having issues with it. The construction of the rifle was exceptional with no rattles or play in any of the components. The shroud was securely attached to the barrel and showed no signs of play. Overall a really well built gun with a few nuances that may take some getting used to.

The Trail NP2 is noticeably lighter than the NP1 which could make it a better choice for smaller shooters or those planning to use it primarily in the field. The NP2 stock is much more angular in design and has some sharp edges on the top and bottom of the for-end, this does not deter from its shoot-ability but is does not feel as polished as the NP1. The cheek riser on the NP2 does sit higher then on the NP1 so getting your eye in line with the scope is much easier, I also liked the pistol grip on the NP2 a lot better as it had much more room for big hands as well as a better grip angle. The trigger guard was also much larger and felt less crowded. Texturing on the NP2 was not as heavy as on the NP1. We did run into problems while test firing with the shroud system coming unscrewed as well. While this problem was easily remedied with a few drops of loctite, it was still kind of a let down. Overall the NP2 is, in my opinion, better for shooters with larger hands and a little better thought out, however the construction of the gun itself feels cheaper, with less care taken in construction.

Winner: Though the Trail NP2 was more comfortable in my opinion, I have to give this one to the Trail NP1.  The NP2 feels just too un-polished in its construction. Perhaps the steps taken to reduce the weight of the gun took a way from the overall quality, but really the NP2 just needs a little better fit and finish.

The trigger on the NP1 has been criticized as one of the longest, and heaviest in the break barrel market. I have to say that I would agree with that statement wholeheartedly. The two stage trigger of the NP1 series takes a lot of practice in order to get good clean trigger pulls. The first stage is long.  When you first shoot an NP1 you almost wonder “When is this thing going to go off?”  With a bit of practice you can get to the point where you can pre-stage the trigger through the first stage which I found was absolutely crucial in order to get accurate shots. The second stage break is a mushy 4 lbs 10 oz and again takes a lot of practice to get used to. There have been many fixes for the NP1 trigger, including replacement triggers that claim to fix many of the issues with the trigger, and though I have not personally tried them, I think they would be worth looking into.

The NP2 Trail trigger is much improved over the NP1. The First stage is smoother and significantly lighter, and while it is still long, it is much easier to stage then the NP1. The second stage breaks at about 3 lbs 9 oz according to our trigger scale but does still have a fair amount of over travel. Overall the NP2 trigger, while much improved is not what I would call a “great trigger”, just good.

Winner: The NP2 takes this one but there’s still a lot that could be improved. While the NP2 is far better than the NP1 trigger, it could still use some improvement. I wish Benjamin would take a page from Hatsan’s book on how a trigger should be.

The claimed velocity of the NP1 is 950 fps, where as the NP2  claimes 1100 fps. Now we know that manufacturer specs are often overstated or achieved by using the lightest lead alloy pellets available so we expected to get numbers lower than what was quoted on the box. What we where really testing for was to see if the the NP2 really can make a significant improvement over the speed (and thus power) of the NP1. 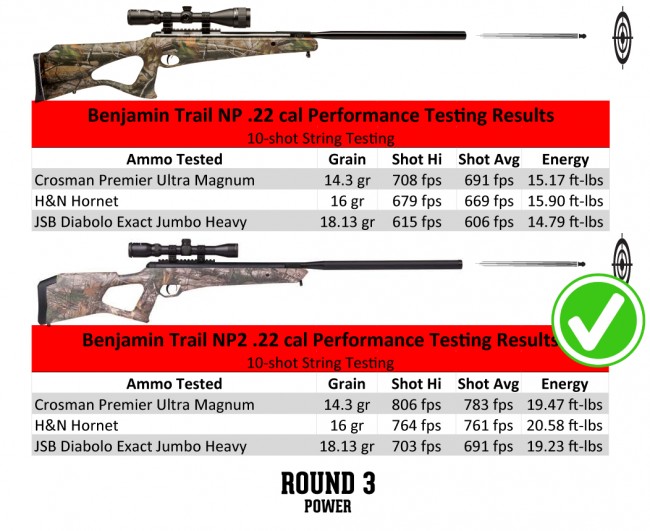 Winner: The NP2 takes this one again, picking up sometimes as much as 100 FPS over the NP1, the NP2 system is much more powerful. Looks like this is another improvement claim that the manufacturer has made good at. Sure it’s not the 150 fps increase the manufacturer claimed, but then again we were using pellets and normal air gunner would use. So 100 fps increase is sizable resulting in a 5 ft-lb increase on almost any pellet you prefer to use.

Typically, we will test 3 or 4 different pellets in the accuracy category, just like we do in the velocity tests, but since these guns are so similar we decided that it was better to find the pellet that each gun liked the best and then stretch the range out to 35 yards and see what kind of groups we could get, that way we would know how each gun performs under optimum conditions. The NP1 liked the H&N Hornets the best out of the pellets that we tested. At 16 grains they are a medium weight pellet and the NP1 seemed to stabilize them really well. On the other hand the NP2 liked the JSB Exact Diabolo Jumbo Heavy 18.13 grain pellets.

Winner: Again this round is taken by the NP2. The better trigger of the NP2 is definitely more conducive to accurate shooting. Though there were 2 flyers out of the group, I was able to stack 3 of the shots right on top of each other with the NP2. The improvements to the trigger as well as what felt like a much smoother recoil impulse contributed greatly in making the NP2 a much nicer gun to shoot than the NP1.
Round 5: Sound Suppression

Winner: This one is a tie, and rightfully so since both of these guns came out of the same factory, and feature the same baffling. Both guns averaged out at 68 dB making these guns both safe for backyard or basement shooting. Not only is the report of the gun quieter, but due to the Nitro Piston the actual operation of the guns was quieter than spring guns as well.

Another area Benjamin has made the claim of improving is the recoil of the gas piston. The NP1 has a very sharp recoil with lots of vibration in the stock. Though dampened by a good recoil pad, a lot of the shock transfers from the rifle into your cheek and the barrel when shooting . This can make shooting the NP1 a bit of a jarring experience, the NP1 quite literally rattles your teeth. The NP2 on the other hand is much smoother, recoil has been dampened extensively and vibration in the stock has been cut down to almost none.

Winner: The NP2 a clear winner as Benjamin has really improved in this area making shooting for longer periods of time much more comfortable.  Evidently they removed all metal-to-metal contact and added a bushing to act as a brake at the end of the stroke. Basically they really came through with reducing vibration which also had the added benefit of reducing the effort required to cock the gun.

It’s great to see a manufacturer living up to it’s marketing claims rather than blow hyperbolic smoke. Looks like the new kid on the block came out on top on this one. The NP2 for the most part lives up to the manufacturer’s claims and is a vastly improved version of its NP1 counterpart.  However, we still would like to see a bit more refinement out of the Tail NP2 in its construction and an even better trigger. One thing is for sure, the Trail series continues to be great choice for those looking for a recreational air gun at a reasonable price. Great for both target shooting and small game hunting. For that reason the NP2 remains a strong contender in the break barrel market.

Browse other Head to Head.
Share with your friends

Up to this point we have always placed two competitors in the ring who have showed similar qualities but from different manufactures. We have yet to see two guns from the same manufacturer let alone the same product line. But for this matchup we wanted to do something a little different. Since manufactures come out […]