Hey everybody welcome to AirgunDepot.com’s top five. We are here at SHOT show and we have got the insider scoop on the most exciting rumors. They’ll change the industry. You don’t want to miss it. Let’s get started.

And number 12 is that Gamo is coming out with a new break barrel that can shoot a pellet 22,000 feet per seconds. Now that is fast.

Number eleven, guys you’re never gonna believe this, I just saw Elon Musk come out of a meeting at the UTG booth. They’re gonna come up with an AI controlled self-aiming bipod. You can hook it up to an app on your phone, I guess, and use it up to two miles away. It’s gonna pull that trigger.

And number 10 on our list is that Gamo is releasing a new version of the Whisperer and it whispers.

Number 9, so word on the street has it that UTG has finally realized that 36 colors in one reticle is not enough so they are coming out with a 172 color reticle with strobe options. Sorry Rainbow Brite.

Guys, I’m down here in the basement of SHOT show and we’ve definitely found our number 8. I’ve just been talking to a company out of Idaho, they’re the SFA, they’ve come up with a brand new silencer. They said that it’s very affordable, it’s eco-friendly, and it’s biodegradable. They said it’ll come in well under $100. I don’t know how they would ever do that, but it’s already FDA approved and they’re just waiting for the ATF to approve it.

Number 7, okay guys you’re gonna want to make sure that you like, subscribe, and get on our email list because Airgun Depot is going to have the biggest pellet sale the world has ever seen. They’re practically gonna give these things away, they’re gonna sell pellets until they’re either completely gone in all of the Western Hemisphere or they go out of business, whichever comes first.

Number 6 is the Predator is in development for a pellet called the Tailpipe, the first heat-seeking pellet in the world. Stay cool my friends.

And number 5 on our list is that Gamo is coming out with a new Gamo Magnum Unbreakable. It’s actually a break barrel that is literally unbreakable. It’s so powerful, it’s like mind-blowing.

Number 3 on our list, FX has come up with a brand new PCP that reuses the air that it shoots. it rearticulates halfway through the barrel, re compresses it, making it 93% efficient. Incredible, you only have to fill it up one time. No no we’re done here, we’re done, no we’re done, this is not on the side and.

Our number 2, Air Venturi has partnered with Air Wick to create the first-ever scented air compressor. It scents the air so every time you shoot you can smell anything from dolphin kisses to Old Spice and everything in between.

Guys number 1 on our list. I just overheard that Umarex is thinking about developing a .50 caliber PCP. It’ll make it the most powerful PCP on the market. And they said they’re gonna come out with it this year. I can’t believe it.

Alright guys, so there you have it, the top 5 rumors that we heard at SHOT show. Don’t hold me to it, but if they come true, you heard it here first. And don’t forget to like, subscribe, and ring that bell. Thanks for watching. 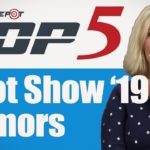 Hey everybody welcome to AirgunDepot.com’s top five. We are here at SHOT show and we have got the insider scoop on the most exciting rumors. They’ll change the industry. You don’t want to miss it. Let’s get started. And number 12 is that Gamo is coming out with a new break barrel that can shoot […]