Hey everybody, welcome to AirgunDepot.com’s top five. From the Wild West to the beaches of Normandy, today we’ve got you covered with our top 5 co2 replicas. You’re not gonna want to miss it.

All right everybody, before you get your panties all in a bunch over this list, let me tell you, the reason that we picked these guns is because they match the size, the weight, and the feel, and the action of the originals. Here we go.

Coming in at number 5 is the gun that won the Wild West. The Colt Single Action Army revolver, otherwise known as the Peacemaker. Arguably the most famous gun ever made in American history. Introduced in 1873, this firearm was carried by Buffalo Bill, Bat Masterson, General Patton, and Teddy Roosevelt, and of course we can’t forget the Duke himself. It’s got a full metal frame and an action that replicates the original in every possible way. Coming in over just a little over a hundred bucks, it’ll cost you a fraction of what the original would cost at a quarter of a million. Your number five. I love that.

Our number four is the Sig MPX. We love this gun. With its belt-fed 30 round mag, it makes it different and unique from almost anything on the market. And you guys, it’s heavy, it’s fun to hold, that’s metal on metal, it feels legit. Like just holding it, I kind of feel like a badass. It’s run on co2 but if you add an HPA tank regulated at 800 psi, it quickly turns into a tactical, semi-automatic, regulated, pellet shooting PCP. With its accuracy and versatility, without question this will quickly become your favorite plinker. So grab your family, grab some cans, and head out in the yard for a night of good old-fashioned fun.

Number three on our list is the Umarex Legends Luger P08. Most of us when we think of the Luger, we probably think of World War two, but this bad boy was around for World War one, and even served its time in the Old West. The Umarex Legends Luger PO8 is available in a weathered World War two version with brown grips, but this is the black widow variant. It fully reproduces the complicated toggling action of the original, which is awesome. The pistol can also be field-stripped, also awesome. But you guys, this is just a beautiful gun. It’s fun to shoot, it’s sleek, and if nothing else, it saved Indiana Jones’ bacon.

Number two on our list is the Umarex Legends Mauser M712. With its drop-down box mag, and it’s selective fire options, the M712 reproduces the key features of the original. The innovative thumb safety make this the original cocked and locked. It’s details like this and its functioning ramp adjustable rear sights, that make this one of the best replicas available. I think that’s the shiza. And did I mention that it can be fully automatic, making it das sexy shiza.

And number one on our list is the Umarex Legends MP40. The most famous German machine gun ever made. This gun has shown up in so many films, everything from Raiders of the Lost Ark to Where Eagles Dare. It’s not only an accurate BB gun, but it looks and it feels like the original. It’s faithful to the original all the way down to the smallest details. It’s got powerful blowback and a 40 round magazine. But best of all, it’s got the fun switch for full auto. You guys I’ve shot this gun, I’ve had my friend shoot this gun, hell, we’ve even had powder burners shoot the gun, and everybody loves it. There’s nothing like putting 40 bbs into something in around 3 seconds to just make you feel alive. Everybody, your beautiful number 1.

All right guys, there you have it, our top 5 co2 replicas. There’s a lot more that we wanted to add, but we had to limit it at 5, so we want to hear what you would have liked to see on the list, put it in the comments below. And if you want to learn any more because we did move pretty fast through the videos, you know where to go, AirgunDepot.com. And always remember to like, subscribe, and ring the bell. We’ll see you next time. 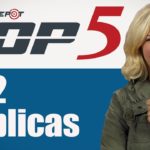 Hey everybody, welcome to AirgunDepot.com’s top five. From the Wild West to the beaches of Normandy, today we’ve got you covered with our top 5 co2 replicas. You’re not gonna want to miss it. All right everybody, before you get your panties all in a bunch over this list, let me tell you, the reason […]