Today we’re talking about a subject that might make you feel uncomfortable, but it’s something that we’ve got to talk about. It’s with a heavy heart that we are covering the top five ugliest air guns. These are the guns that you don’t want to take home to mama. Let’s get started.

Today we’re talking about guns that are so ugly I swear they were designed on a dare by someone who was drunk, who had already given their two-week notice, on a Friday afternoon. And you might like some of these guns on the list, and that’s okay we won’t judge you, at least not too hard, but you should ask yourself, do I love these guns because of the way that they look or because of the way they shoot.

Your number five. Number five, the FX Impact. This may be one of the greatest air guns ever made, but she’s not a looker. Its form follows its function, strips away everything that you don’t need, and then adds about a hundred and thirty seven o-rings that apparently you do. She’s not gonna be one you hang over your mantle, but that’s okay, because that area is gonna be full of all of the trophies that you’re gonna win with her. Number five.

Number four, the Hatsan Gladius. The Gladius has a lot going for it, and that’s a good thing, because you would never buy it for its looks. It’s got accuracy, power, adjustability, and an udder. If ugliness were a crime, Gladius would be doing hard time.

Come with me if you want to live. Number three, the Kral Puncher Armor. I am pretty sure that this gun was in Terminator, Predator, Commando, and Frozen. You don’t believe me look it up. Okay don’t look it up. It has a shrouded barrel, convenient magazine storage, and adjustable power, but it ain’t easy being green. It’s amazing that Kral took such a great gun and made it look like this. Let it go, let it go.

Our number two, the industry brand QB 57. This is one of those guns that’s so ugly you almost start to like it. Kind of like that cat or your neighbor’s kid that you feel bad for cuz it wasn’t his fault he was born that way, but he still gives you nightmares. This is a bullpup Springer. Truly a stranger gun. So if this didn’t make our number one, then what did? Before we get to it, make sure that you like, subscribe, and ring that bell at the end.

Now our number one. And your number one, the Benjamin Bulldog 357. If the Puncher Armor was out of Predator, this would be out of Starship Troopers. I really don’t know where to even start with this gun. It’s got a pic rail for days. It’s powerful and it’s accurate, but it’s definitely one that you’d swipe left on if it ever said you were a match. If there’s ever a gun that you wanted to shoot in the dark, it would be the Bulldog. Ladies and gentlemen, your ugliest number one.

There you have it, our list. Those are some ugly guns. I’m almost scared to ask because I don’t really want to see any more ugly guns, but did we miss any? Put your comments down below. And if you want to buy any of these guns, well you’re crazy. Just kidding, they’re all really great guns. Check them out at AirgunDepot.com. And make sure to check out our other top 5 videos, and with that I say adieu. 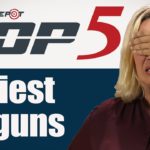 Today we’re talking about a subject that might make you feel uncomfortable, but it’s something that we’ve got to talk about. It’s with a heavy heart that we are covering the top five ugliest air guns. These are the guns that you don’t want to take home to mama. Let’s get started. Today we’re talking […]