Hey everybody, welcome to AirgunDepot.com’s top five. Today we are counting down the top five worst named air guns of all time, at least in our opinion. Let’s get started.

You know that all of these are really great guns because they’ve all survived their names, kind of like a boy named Sue. Number five.

Number five, the Umarex NXG APX. This is actually a great gun, it’s really fun for backyard plinking, you can pump it three up to ten times, something that your your young ones will for sure love to use. But when you think of the name, you do have to wonder, was it like an enigma code from World War 2 or were the gun namers at Umarex just sitting around one night, dead drunk, and they thought that would be a great name, and they came up with it in Scrabble. Makes you wonder.

Number four, the Hatsan Hercules Bully. This beast of a bullpup comes in every caliber from .177 to .45. It’s got a high shot count, it’s got tons of power, it’s just a terrific air gun. But you should know it took us two and a half weeks to come up with an opener for when Travis reviewed this gun. And the best thing that we could come up with was putting him on the roof, holding the gun, yelling at people, and that was the least offensive thing that we could think of. No guns should be named the bully, especially a great gun.

Number three on our list, the Seneca Aspen. This is a multi-pump PCP, you heard it folks, you don’t have to hook it up to a compressor or an air tank, you can just grab a tin of pellets, pump it up, and shoot it as long as you want. This is an incredible gun. Not some European perfume ad. Did we do that already?

Number two on our list, the Kral Puncher Big Max. You want fries with that? You add pellets and a scope, you’ve got a combo. It’s already come super-sized. It’s got two tanks of air holding up to 850 cc’s. It’s like Rockstar and McDonald’s got together and made an airgun. Crawling, punching, now we’re at McDonald’s, none of this makes sense.

Number one on our list, the Walther Maxima Thor. This is a beautiful and powerful air gun. She is German made, she’s got cutest little butt around, but Maxima Thor? I mean what does that even mean? That’s not even a word. And Thor was the worst Marvel movie ever made, and Maxima Thor is even worse. Thor was easy on the eyes though, just like the Maxima Thor. Your number one.

So there you have it, that is our top five list of the worst named air guns. Did we miss any? We want to hear in the comments below, and if you want to learn any more or purchase any of these air guns, despite their horrible names, go to AirgunDepot.com or wait and click at the bull’s-eye at the end of the video. Always make sure to like, subscribe, and ring that bell. Thanks for watching. 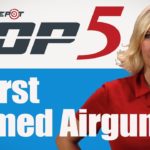 Hey everybody, welcome to AirgunDepot.com’s top five. Today we are counting down the top five worst named air guns of all time, at least in our opinion. Let’s get started. You know that all of these are really great guns because they’ve all survived their names, kind of like a boy named Sue. Number five. […]