The new Synthetic Benjamin Marauder seeks to address several suggestions made over the years about the original.

Starting with the new synthetic stock, it helps shave nearly a full pound off the original, while adding a more ergonomic grip and adjustable cheek piece. I’m still partial to a wood stock, but you can’t argue that a lot of thought and attention went into the design of this new iteration of the Marauder.

There are some other changes that you can’t see. The rifle comes with a factory installed de-pinger which helps reduce the mechanical noise. Benjamin’s also promised some “magic” with the valve to deliver a more powerful and consistent shot string. The original .25 was a bit of an air hog, we’ll see how that plays out in our new model.

The rifle has a 215cc air reservoir that can be filled up to 3000 psi. To help you keep track of your usable pressure there’s a pressure gauge in the forearm.

The rifle does not have any open sights so you’ll need to take advantage of the 11mm rail on top of the receiver. I’ve mounted essentially my dream scope to our test Marauder. The Hawke Sidewnder 3-12×50 side focus scope. This scope is a thing of beauty, we’ll spend some more time on that in another video.

You’ll need to use 2 piece mounts so that you can straddle the breach and the 8 shot, auto-indexing magazine. Unlike my first go around with the .25 cal marauder, these mags have worked flawlessly.

The trigger is the same amazing fully adjustable match grade trigger. One of the best around for target shooting or field work.

The Marauder is a PCP airgun that operates at a maximum of 3000 psi. For testing I’ve been using my AirVenturi Regulated Fill system. This small 4500 psi system gives me about 6 to 7 top offs from 2000 psi back up to 2900 psi. To fire the .25 cal Marauder you need to first load the 8 shot magazine. Once you are loaded, install the magazine into the side of the receiver, close the bolt and you are ready to fire.

Firing the Marauder is about as pleasant as you could imagine. There’s no recoil to deal with and the trigger is very predictable. The only negative in the mechanics is the bolt action. It can be very gritty and has yet to really smooth out. You’ll need to pay close attention when cocking the Marauder as you can accidentally load 2 pellets and possibly jam up the gun.
The performance and accuracy.

My original .25 Cal Marauder absolutely loved the Benjamin Domed pellets, so that’s where I started. I was pretty pleased with my groupings at 30 yards and then things when downhill very quickly after that. Fortunately I had brought my JSB Exact Kings along and that pretty much turned everything back around.

The JSB exacts averaged 834.6 fps across 2 magazines which is pretty close to 40 fpe at the muzzle. Unfortunately this is where the new marauder hit the first bump in the road. The extreme spread across the first 10 shots was 44.4 fps if you go to the end of the 2nd mag, that jumps to an extreme spread of 92.6 fps. This is way off spec from the original that I tested back in November of 2010. The power is also off, as the original .25 cal marauder shot the heavier 28.7 grain benjamins an average of 850 fps or around 44.61 foot pounds.

Don’t get discouraged as there is an area where the new Marauder shines and that’s noise level. The old .25 cal marauder averaged about 112db in my indoor tests. The new version was just over 100 db. This makes the new .25 cal Marauder a potentially backyard friendly powerhouse of an airgun.

So let’s look at our final Summary:

So here’s the question everyone’s been asking me. Is the new .25 cal synthetic marauder “better” than the original? I can’t really say that it’s undeniably better.

There’s always a give and take. The new Marauder is undeniably quieter, lighter, and more ergonomically pleasing to shoot. The trade-off seems to have been that little bit of extra power and shot consistency. Now that didn’t impact my groups out to 50 yards, but you can bet as you increase your range, the drop in velocity from shot to shot is going to affect your point of impact.

The biggest improvement, which is more than sufficient for me to want one, is the reduced noise. That means I can target practice in my back yard with the same gun that I’m taking out hunting latter that weekend. I couldn’t have done that with the old .25 cal Marauder.

I also want to point out that in both cases I tested the rifles as I received them and without modifications. The beauty of the Marauders in general, is that you can adjust just about everything.

If you want more power, you can turn it up. If you want more shots, you can adjust for that too. It takes time and patience, but these airguns can be fine-tuned without the need of an engineering degree. All you really need is a good chronograph and some spare time.

One thing that is undeniable is that the new synthetic Marauder is a great airgun that’s positioned to carry the Benjamin name and airgunning tradition with honor. 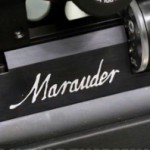