In November of 2014 Blaine Manifold, the CEO of Hatsan USA made a trip out to our offices here at AGD. He brought along some of the new product that the folks at Hatsan had planned to release for 2015. We were excited to say the least. After showing us 4 or 5 models, Blaine asked what we thought would be the most exciting developments in the airgun industry for 2015. With out hesitation I replied back “big bores are the next hot thing.” He agreed, and from a hard rifle case he produced two rifles, one marked .357 and the other .30, with eyes as big as dinner plates I looked over the two prototypes. Immediately the next question was “Can I shoot it?” Unfortunately, that day we had no .30 or .35 ammo to be found, I was going to have to wait patiently for my chance with one of these intriguing rifles.

Flash forward to SHOT Show. One of my first stops was to see Blaine and the team at Hatsan. He knew why I was there. The first thing he said as I walked up was the first shipment was on the water and that my test rifle was en route. Excellent. Suddenly I couldn’t wait to get home. When we got back from the show my test rifle (a .357 version) was ready and waiting.

Accuracy, Power, and a Whole Lot of Fun

For those that are Hatsan fans you will notice right off that the new Hatsan Carnivore air rifle is built off the BT-65 platform. Sharing many of the same features, they have been upsized for big bore calibers. The BT-65’s have proved to be reliable and accurate guns and the Carnivore is no exception.

For my tests I mounted a Hawk 4-12×50 HD Scope on the .357 version of the Carnivore (a .30 caliber version is available as well) For initial tests I had two options for ammo, 81.02 Grain JSB Diablo pellets and Air Venturi 115 grain hollow point pellets. With rifle in hand it was off to the test range.

First up was the JSB’s. These pellets resulted in some phenomenal accuracy. I was able to place 5  shots all through the same hole with ease. 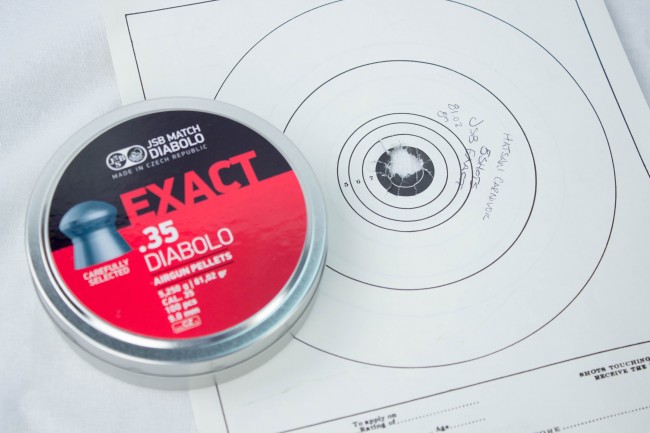 The hollow points had a pretty drastic point of impact shift, they landed about 3 inches high from point of aim. The grouping was acceptable, I had one flyer that pulled low but I blame that more on me than the gun. 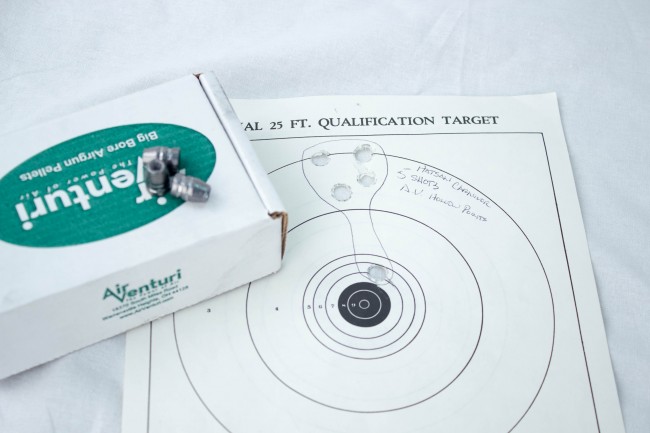 I also want to talk a little bit about the expansion of both these pellets. The JSB’s expanded beautifully. The examples shown were fired into a stack of old phonebooks. It penetrated about a third of the way through the first book before stopping. The hollow point showed less expansion, however I did notice that when I recovered the pellet there was quite a bit of material that had clogged the cavity which I believe is what caused it to expand less. The hollow point also penetrated much deeper, passing more than half way through the first phone book.

Before and after for each of the pellets tested.

The power these rifles put out really is something that needs to be witnessed. Obviously they are a great option for hunting animals up to coyote or javelina sized, but they also make a great option for shooting longer distances. Both the .30 and .35 cal. are going to buck the wind better than smaller calibers and I’m anxious to see how they will perform.

I have plans of pushing these rifles beyond the 100 yard mark in the near future and I am excited to see how they fair. Overall, as with any big bore air rifle, it’s pretty much impossible not to have a big grin plastered across your face when shooting these guns.

A Few Points to Consider

We all know that that there are no perfect rifles, with that in mind here are a few things to remember when considering the Hatsan Carnivore:

“But what are you going to do with a big bore air rifle?”

I had the pleasure of taking this demo gun with me a local fun shoot put on by some of the gun manufactures and retailers in our area. These big bore airguns drew quite a crowd, but one statement that kept being repeated was “Yeah the thing is cool, but what are you going to use it for?” I think that for people who’s only foray into the airgunning world was the pellet guns they had as kids, its a valid question.

Big bore airguns are designed with hunting in mind, and the .357 will have no problems taking game. The way I explain airgun hunting to guys who are not familiar with the subject is that it’s more closely related to archery hunting than rifle hunting. The principal of taking game with an air gun is more about blood loss rather than shear static shock. Bigger bullets mean bigger wounds, which equate to being able to better take game.

Since both the .30 and .35 cal are heavier, you can use these for longer sniping games and target shooting from greater distances. Just make sure you do these out in the country as even with the “Quiet Energy” technology, these aren’t a backyard gun!

Thirdly, why do you need a reason to own a big bore air gun, or any airgun, or any powder burner for that matter? Own it just because its cool, own it because its different or own it just because you want to. As I already said, these guns are a ton of fun. I highly doubt that anyone who shoots them won’t walk away with a big smile on their face. The Hatsan Carnivore big bore is a great gun for the money, and even if your buying it just for the novelty of a .35 caliber air gun your still going to leave the range happy every time you take it out.

So where do we go from here? Well my journey with the Hatsan Carnivore is just beginning and I have many more adventures with this rifle planned. Make sure to subscribe to our YouTube channel, and follow us on Facebook and Instagram to get all the updates as I put the Carnivore through its paces. 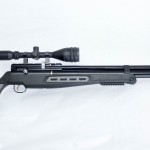 In November of 2014 Blaine Manifold, the CEO of Hatsan USA made a trip out to our offices here at AGD. He brought along some of the new product that the folks at Hatsan had planned to release for 2015. We were excited to say the least. After showing us 4 or 5 models, Blaine […]