We enter the Tactical Pistol Super-Welterweight Division and pit two non-blowback pellet pistol replicas against each other. Each emulating the Beretta Model 92. The Beretta model 92 has served in capacities the world over. Many Police units favor the Model 92 for its reliability and smooth shooting. Even the U.S. Militaries service pistol, the M9 is based of the famed Model 92. Today we throw two replica airgun versions of the Beretta Model 92 in the ring, who will come out on top? The economical and innovative new comer, or the rugged and reliable old standard? Let’s meet our contenders!

In the red corner, hailing from the ancestral home of Beretta firearms, the Italian made Chiappa AG92. The AG92 is a polymer construction gun, weighing in at a svelte 1.3 pounds. This newcomer packs some hidden punches with its slick new dual rotary clip system as well as dual CO2 cartridges. But will new technology be enough to knock off the reigning champ?

In the blue corner weighing in at a burly 2.75 pounds, the reigning Model 92 replica champion, the creme de la creme, from all the way in far off Germany, it’s the Umarex Beretta Model 92. With all the fit and finish of its firearm big brother this true replica model pulls double duty as a training and plinking pistol. The Model 92 has been at the top of its game for some time, can it keep its title against this new competitor? Let’s head to ring and find out!

The Umarex Beretta is about as close to the real thing as you can come. The weight and finish are spot on as well as the Beretta proof marks making it a great option for collectors, owners of the real model 92, or those looking to use them in displays. The frame, slide, trigger and trigger guard are all metal and while the grips are a bit plasticy, there is the option of getting a wood gripped version for even more realism. Umarex has simply done a great job of getting every detail correct on the Model 92.

The Chiappa is made in Italy. Aside from that and it’s controls, that is about the only thing it shares with the real Mod. 92. The Chiappa ihas polymer construction with a steel barrel also shrouded in polymer. That being said the construction is very sturdy for a polymer gun. The Chiappa also features a 1913 accessory rail for mounting lights and lasers. The Chiappa 92’s grip panels are molded into the frame and are not removable, however the magazine release does function allowing the access to the CO2 cartridges.

Winner: The all metal, realistic weight, and the attention to detail in construction make the Umarex Beretta 92FS the clear choice here. It’s the clear stand out for this round.

Round 2: Velocity, Capacity and Shot Count.

The Umarex Beretta fires from a standard 8 shot rotary clip and uses a single 12 gram CO2 cartridge. The cast metal rotary clips were easy to load but the help of a seating tool made loading much easier. Because the Umarex Beretta is a non-blowback design the shot count was fairly high, we got about 8 full magazines, or 64 shots out of the Model 92 before velocity dropped off significantly. Velocities across 14 shots yielded a high of 424.3 fps a low of 362.6 fps and an average of 388.7 fps. Very respectable numbers for an air pistol. Again the lack of blowback comes into play as the gas is only being used to fire the shot and not cycle the action.

The Chiappa features unique and innovative dual rotary clips that fire in series of each other giving you 14 shots total. Loading the clips is easy enough, again using a seating tool to make it easier, and the clips feature red markings making aligning them in the gun easy. There were a few times when the magazines would fail to cycle properly and 2 pellets would fire, but for the most part it seemed to be reliable. Velocities out of the Chiappa across 14 shots gave a high of 335.5 fps, a low of 171.1 fps and an average of just 261.02 fps. What the Chiappa lacks in power it makes up for in shot count, the AG92 uses two 12 gram CO2 cartridges and being that it is also a non-blowback gun we were able to get shot counts well above 90 shots per fill, great economy for backyard plinking.

WINNER: Though the Chiappa is a clear winner on shot count and magazine capacity, the Umarex Beretta 92FS wins this round as it was much more consistent in the power that it produced as well as overall reliability. Though the Chiappa is innovative and the dual cycling clip is a fantastic idea, what is really the point of innovation if it is not reliable. Once again the Umarex comes out on top.

Both the Umarex Berretta and the Chiappa are designed to be double action only style triggers, however they can be fired in a single action mode if the hammer is manually cocked back. Firing in single action gives a much lighter and shorter trigger pull as you are not cycling the clip with each trigger pull.

The Chiappa AG92 trigger pulled at 8.9 pounds in double action and 5.4 pounds in single action mode. Though the initial double action trigger pull was lighter the feel of the Chiappa trigger was far less consistent. As the trigger was drawn further and further to the rear the tension increased and made breaking a clean shot hard when trying to accurately pre-stage the trigger. In single action mode the break was very faint and spongy with almost no semblance of a clean break. The best way to describe it was plasticy, almost toy like.

WINNER: The Umarex Beretta really cannot be stopped now, the trigger, while slightly heavier, was leaps and bounds above that on the AG92

For the accuracy round both pistols were tested at a distance of 10 yards using Crosman Premier 7.9 grain domed pellets. We fired 8 shots using only the double action mode. Shots were fired slowly to assure that the best trigger pull for each shot was achieved. Both guns were topped off with fresh CO2 before testing.

Winner: The Umarex Beretta 92FS again pulls it off with a much tighter shot group. Much of this is attributed to the far smoother trigger pull of the Umarex.

Round Winner: This has been a flat out TKO for the Umarex Beretta 92 pellet pistol, and really we can’t say that we expected any different. The AG92 from Chiappa like so many contenders really tried to bring some new innovation to the table and made all the promises of being the next champion, but when it comes time to show us what it’s made of, quality and reliability that count the most. All bets aside, the AG92’s dual clip system could be the next big thing, it’s a great idea after all, but until it’s 100% we just don’t see it dethroning the the classic Umarex Beretta Model 92 anytime soon. 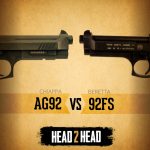 We enter the Tactical Pistol Super-Welterweight Division and pit two non-blowback pellet pistol replicas against each other. Each emulating the Beretta Model 92. The Beretta model 92 has served in capacities the world over. Many Police units favor the Model 92 for its reliability and smooth shooting. Even the U.S. Militaries service pistol, the M9 […]