Getting started in airgun hunting can be somewhat of a daunting task. There are so many opinions and ideas out there of what caliber and what power plant to use for different types and sizes of game. Often times all the buzz in airguns is centered around the latest and greatest pre-charged pneumatic guns but there are many other options available that may be suitable for small game hunting. In this short discussion of airgun power plants we wanted to take the chance to answer some of the more common questions that we get about each type of power plant and a few of the advantages and disadvantages of both.  Though this guide a meant to be a resource for newer airgunners, we also recommend some of you more experienced shooters to share your thoughts in the comments below!

For the most part pre-charged pneumatic airguns are going to be the most versatile when it comes to hunting. PCP’s typically produce higher velocities than other power plants and are capable of firing heavier pellets thus resulting in more muzzle energy. This also results in the ability to effectively take game at longer distances. With most PCP’s you can expect to take game at distances up to 75 yards and beyond depending on your gun.

The big drawback to PCP’s is the initial cost of getting into them. Guns typically run more than their spring or multi pump counterparts and the cost of an carbon fiber air tank or a PCP hand pump must also be factored in, that being said for many shooters the benefits of a PCP outweigh the costs and with many lower cost guns from brands like Benjamin and Hatsan USA that offer big power on a reasonable budget, more and more shooters are catching the PCP bug.

Break barrel air rifles are probably the next most common guns seen in the field. Whether a traditional spring or a gas piston break barrel, these rugged and reliable guns are perfect for smaller game and pest control. The biggest and most apparent advantage to  springers is the lack of an external air source. Springers are 100% self sufficient, all you need is ammo which makes them a great choice for keeping around the house for taking care of pests or for packing around in your vehicle for impromptu hunting excursions.

In the break barrel world you have two power plants to compress the air needed to propel your projectiles.  A spring or a gas filled piston. Spring rifles use a coiled metal spring fitted with a piston. The spring is compressed when the gun is cocked and released when the trigger is pulled. Spring power plants have been around for quite some time and are still produced today.  Gas piston airguns work in much of the same manner however instead of compressing a spring, a piston compresses a cylinder filled with gas, much like gas shock on a car or truck. When the trigger is released the gas expands pushing the piston forward to fire the projectile. Gas piston guns are a relatively new advancement in the world of airgun technology and have become quite popular in their own right. Some benefits of gas pistons is that you can leave them cocked without damaging, and they offer more longevity while also maintaining their initial power over their life.

Underlever airguns are another type of spring or gas piston gun that are popular with hunters. An underlever is different from a break barrel in that the barrel is fixed, but the spring or gas piston is cocked by a separate lever located under the barrel.  Underlevers can often be more expensive than break barrel guns however they are also more consistent as the barrel is fixed and does not move after each shot. Underlevers are also very popular for use in field target shooting.

The downfalls to springers and break barrels are limited caliber availability and power. Typically a breakbarrel or underlever gun will be in .177, .20, .22, or .25 caliber which limits your hunting to pests and small game up to about racoon sized animals typically at distances of 50 yards or less. Another thing to consider is that some traditional spring guns take quite a bit of skill to fire accurately as they are more sensitive to outside forces from how the rifle is being held as well as the recoil that is generated by the spring decompressing. To combat this hold sensitivity many airgunners employ what is known as the artillery hold, which is simply holding the foregrip of the rifle very lightly and allowing the gun to recoil naturally without constraint much the way an artillery piece would recoil in its mount.

This method allows the rifle to consistently move in the same manner shot after shot and results in tighter and more consistent groups for most rifles. Because of this there is some learning curve when first getting used to a spring or piston powered gun, and though some guns are more hold sensitive than other it is still a good practice to put in place. Over time anyone can learn to shoot a break barrel well, and because they are so simple many choose them as their primary small game air rifle. A good break barrel is almost a must for any airgunner and with their simplicity and consistent power plus the added emphasis on basic marksmanship, they make a great choice for hunters of all skill levels.

Multi-pump pneumatics are a great option for the hunter on a budget. Again, with these types of guns you get the advantage of being self sufficient and not needing an outside air source, but at the same time you are limited to the calibers and types of game you can take. Multi-pump pneumatics are most common in .177 and .22 caliber and though they may not make a lot of power they are typically very accurate and easy to shoot.

Many multi pump shooters will upgrade their guns with aftermarket parts to squeeze more power out of them. Multi-pumps make great squirrel and pest guns and are a favorite for people looking for a lightweight hunting rig to pack around while hiking or backpacking or for short range hunting at about 30 yards or less. Being so widely available, multi-pumps are also a great option for new shooters looking to get into the sport on a budget.

Of course these are not the only airgun power plants that are available. CO2 air rifles and single stroke pneumatic guns are also very popular among target shooters and plinkers alike, however due to their limited power we do not typically recommend other available power plants for hunting even for the smallest game. We hope that this guide has given you some good ideas about what type of airgun would best suit your needs. As always feel free to share either your experience or ask questions in the comments below. This is just the first in a series of articles and videos that we are producing about the subject of airgun hunting. Be sure to subscribe to our mailing list and follow us on Facebook and Instagram for video and pictures from some of our airgun hunting adventures as well as are most up to date hunting air rifle recommendations. 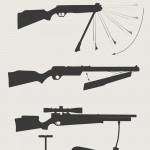 Getting started in airgun hunting can be somewhat of a daunting task. There are so many opinions and ideas out there of what caliber and what power plant to use for different types and sizes of game. Often times all the buzz in airguns is centered around the latest and greatest pre-charged pneumatic guns but there are […]