Summary
There are a few major differences between the Beeman R1 and R9 air rifles. These matters, such as weight, maximum velocity, and more, are important to consider before purchasing. While the two models have notable differences, they are also similar in a few key ways as well.

Beeman R1 vs R9
The right air rifle is paramount to making your mark, especially if you are using it for hunting small game or pest elimination. Many shooters have questions about the Beeman R1 vs. R9 in terms of what makes them different or why they should choose one over the other. While the brand of Beeman is one of the most trusted names on the market, each air rifle offers something a little bit different from the others in their lineup. Let’s take a look at the main differences between the two air rifles so you can make the right choice.

Weight/Size
The biggest thing worth noting in the Beeman R1 vs. R9 comparison is the weight and size between the two options. The R1 is the bigger, heavier option of the two coming in at 8.8 lbs. and as a result brings more power. The R9 is smaller and comes in at 7.3 lbs. which has its benefits such as being lighter for carrying. The barrel length differences between the two are worth noting when looking at size. The R1 is longer with a barrel length of 19.75 inches with an overall length of 45.5 inches to give you an idea of how it compares to the 16.33 inch barrel of the overall length of 43 inches for the R9 model. The R9 is less powerful, but it is more easily maneuvered in thick brush.

Sights
As any shooter knows, the sights are crucial in accuracy in many scenarios. The R9 has the R1 beat in this aspect. With the front sight globe with aperture inserts and the rear sight being adjustable for windage and elevation, the R9 is sold with sights as part of the design to help with accuracy and ease. The R1 has the option of adding scopes later on but isn’t sold with them in place.

Max Velocity
Another way these two air rifles differ is the max velocity. The R1 comes in with a max velocity of 765 FPS in .22 while the R9 clocks in around 935 FPS in .177. The FPS (feet per second) is one of the more hotly debated aspects of air gunning in the industry. This measure basically rates how fast the ammo travels per second and while some say it is one of the biggest things to look at when shopping, others raise valid points as to why it isn’t the main factor. For instance, if you are shooting with a lighter ammo type, the higher FPS could be a result of that and not a true reflection of the speed once you use the air rifle with a heavier ammo. While you should take note of the FPS when comparing the two, you also want to keep in mind that these figures aren’t always 100 percent accurate.

Similarities
Are there any similarities between the Beeman R1 and R9 air rifles? They are both the same type of air rifle just with the above-mentioned differences. For example, both the R1 and R9 are break barrel rifles with automatic safety and spring piston power plants. They are both single shot rifles with 11mm dovetail design and rifled barrels. They are similar in the fact that they both have trigger pulls of 2.1 lbs. with two stage adjustable triggers. The loudness is the same as well with both models coming in at a medium loudness rating. The overall designs are pretty similar, such as both options having a rubber buttplate and beech stock, so the main differences are in the areas mentioned above.

Making the Right Choice
When it comes to choosing between the two based on their differences, the most important thing to consider is what you intend to use the airgun for in terms of activity. The most significant difference is the power in determining whether you should choose the R1 or R9 version. The good news is that Beeman is a great brand with a lot to offer in terms of performance and longevity. This means it is just a matter of narrowing down which option of these two great models is better suited to you. 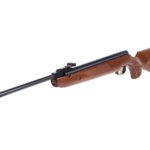 SummaryThere are a few major differences between the Beeman R1 and R9 air rifles. These matters, such as weight, maximum velocity, and more, are important to consider before purchasing. While the two models have notable differences, they are also similar in a few key ways as well. Beeman R1 vs R9The right air rifle is […]