If you are new to the shooting world, specifically handguns, you’re going to get hit with a lot of terms. (This applies to both firearms and airguns) Two terms you’ll see deal with how the gun operates when you pull the trigger.

The first is “Single Action,” often identified as “SA” and the second is “Double Action” identified as “DA.”  A handgun will be one or the other (some will allow the shooter the option to shoot either SA or DA, but by default, it will be a DA gun) and each has their strengths and their weaknesses, so it’s important to know the difference when you are making a buying decision. Let’s get into it.

What is a Double Action Airgun?

Double action means a gun’s mechanism operates multiple functions when you pull the trigger.  The trigger cocks and then also releases the hammer or striker in the same motion. It basically means the trigger does all the work as opposed to having the shooter cock the hammer manually and then squeeze the trigger to release the striker. A great example would be the Walther P99 DAO pistol which is a double action only.

Like firearms, air guns are available in either single action or double action. There are also models with the option of firing in your choice of single or double action, like the Colt Python, depending on your shooting preferences. Basically, most air guns that don’t have the ability to cock the hammer manually are double action.

What is a Single Action Airgun?

A single action airgun will require the shooter to cock the hammer before they pull the trigger.  They will need to do this each and every time in order to fire.  A good example of this type of airgun is the Colt Single Action Army (SAA) by Umarex USA.  This six-shot revolver is modeled after the old Colt .45 SAA that ruled the wild west.  To fire it, the shooter will need to cock the hammer which rotates the 6 shot cylinder.  When the shooter pulls the trigger the hammer falls and the co2 drives the pellet or bb down the barrel.  Simply repeat the process to fire the next round.

What Do the Various Acronyms Mean?

If you have looked around at air guns, you have probably seen some acronyms related to double or single action. These are important to know so you can make the right call for your shooting preferences when shopping for an air gun. Here are the ones you need to know:

When looking at whether one is better than the other, it is important to note that each option has its own pros and cons. For example, a single action has a shorter, and often much lighter, trigger pull which may feel more comfortable to some people, especially new shooters just getting started. Single action has the drawback of increasing the amount of time between shots which may be a factor for some shooters. A double action trigger is faster and offers a bit of increased safety, but the longer, heavier, trigger pull may not be ideal or preferred for some shooters. The longer trigger pull is something a lot of shooters get used to over time as they develop their shooting skills.  Which system is better will depend entirely on the shooter, and to a lesser extent the specific shooting discipline or application. If you are unsure which ones feel right to you, you should try them both to see the difference in operation and feel when firing between single and double action. Do keep in mind that the more you shoot with a particular action, the more familiar it will become to you.  You’ll develop muscle memory over time and either one will become completely natural. 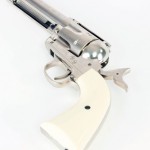 If you are new to the shooting world, specifically handguns, you’re going to get hit with a lot of terms. (This applies to both firearms and airguns) Two terms you’ll see deal with how the gun operates when you pull the trigger.   The first is “Single Action,” often identified as “SA” and the second is […]