Ready to move from firearms to airguns?

The idea of switching to, or at least incorporating, airguns into a person’s shooting repertoire, was a topic of many discussions at SHOT SHOW this year.  In fact, I’ve been taking several calls each week from folks that are rimfire and center fire shooters asking me; “what’s the best airgun to use for target practice and small game hunting?”  Well, we’ve covered a lot of this over the last several months, but it never really hurts to go over it again.

Before we jump right in to answering that question, let’s talk quickly about the “why” someone would want to make the move.  For me it was convenience and expenses.  While the availability and price of .22LR ammunition was not an issue 7 or 8 years ago, finding a legal place to shoot was a problem.  When I lived in town, I was only 15 minutes from the local indoor range and my membership was only $60 per year.  I thought by moving out in the country I could just setup in my back yard and go to town.  Unfortunately my property was just inside the city limits so that mean NO discharging of firearms.

As I contemplated what to do to satisfy my trigger finger, I figured that Price was going to be the most important consideration.  So, I began with some fairly inexpensive import airguns.  I shot Gamo, Crosman, Remington, Beeman, etc.  The bottom line with these guns was that they certainly sent lead down range, where they sent it could sometimes be completely random.

So again with the rimfire to airgun comparison; if the faster and more powerful .17HMR is more accurate than my .22LR, then it stands to reason that the faster my pellet gun shoots, the more accurate it will be right?  Well… not so much.  After another half a dozen airgun purchases I realized that velocity does NOT equal accuracy.  Some airguns boast, and some even reach, velocities of 1200 FPS and greater.  The problem is that the basic aerodynamics of pellets means they were never meant to fly that fast.  Generally, 1200 FPS will be faster than the speed of sound.  When a pellet comes back into slower than the speed of sound flight, it experiences some pretty radical forces which nearly always destabilize it and cause it to tumble out of control.  While testing these super high velocity rifles and ammo, I found the pellets would start key holing at around 20 yards.  The other consideration, is that to achieve these kinds of velocities, spring and gas ram airguns generate a ton of recoil and vibration.  This further increases the difficulty to achieve repeatable accuracy.  Shooting spring guns takes a completely different technique vs shooting rimfire or center fire guns.  If you’re not willing to put in the time and energy to learn it, then you need to consider skipping spring / gas ram guns altogether.  In the end, all I wanted was to see similar accuracy out of my airguns that I could easily achieve with my .22LR.  So it was not Price (within reason), or Power, but actually REPEATABLE Accuracy that was the most critical to me.

Now it has taken several years to get to this point in my understanding of how to get what I wanted so many years ago.  I had to completely reeducate myself and temporally set to the side all I thought I knew about shooting, so that I could see the sport of airgunning from a new perspective.   I have found a slew of great airguns that accomplish exactly what I wanted and there’s one thing that you need to prepare yourself for up front; consistent, repeatable, 1″ 50 yard accuracy from airgun comes at a price.

The only airguns that I’ve seen that can really do it day in and day out are the PCP class of airguns.  You don’t need an expensive PCP, but you need to really just skip the springer class and save yourself the frustration. That is unless you are willing to put the time and energy into learning how to shoot them, which will be another article series coming up soon! Let’s assume for now that you DON’T want to learn how to shoot all over again and you just want to take what you know and see respectable results day one.  What do you need to get started?

AirgunDepot has accurate PCPs starting under $400.  The Benjamin Discovery Kit comes with the rifle AND a way to fill it for around that price.  I started with the Benjamin Discovery and then graduated to the Benjamin Marauder.  Both guns are capable of 1″ groups at 50 yards on a regular basis.  They don’t require any special shooting techniques either.  Just add high pressure air (There are various articles in the Airgun University on this topic.) quality pellets, and you’re off to the races.

If you don’t think PCP airguns are for you, there are some spring / gas ram guns that can get the job done as well.  Maybe we’ll take some time and look at those here soon.  In any case, I hope that my experiences and this article can help you avoid some of the common mistakes and have a successful transition from rimfire into the wonderful world of airguns! 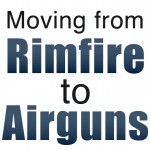 The idea of switching to, or at least incorporating, airguns into a person’s shooting repertoire, was a topic of many discussions at SHOT SHOW this year.  In fact, I’ve been taking several calls each week from folks that are rimfire and center fire shooters asking me; “what’s the best airgun to use for target practice […]