What Do the Numbers Mean on a Rifle Scope

There are a lot of numbers listed on rifle scopes that you need to know. The main numbers are the magnification and the lens size in millimeters. This will usually be seen as a number, the letter X, and a second number. The first number is the magnification of the object and the second number is the size of the lens. These figures are usually accompanied by other numbers such as how much the field of vision will decrease, the diameter of the light leaving the scope and entering the eye referred to as the exit pupil, and eye relief which indicates how far the eye can be placed from the eyepiece without compromising the field of vision. These figures are used as a way to tell what the scope has to offer the shooter.

What Do the Numbers on a Scope Mean?
A rifle scope can make it easier than ever to hit the mark. The novice shooter may know a scope is a good bet from talking to any experienced shooter, but there is still a lot of information to dissect in this tool. While you could just add it to your gun without really questioning it, you will definitely get more mileage out of it if you actually know what the numbers mean and how to use them to hit your mark. So, what do the numbers mean on a rifle scope? Let’s take a closer look at this important matter.

Main Numbers
The reason that scopes are such popular options for aiming a gun is that they both magnify the target and allow you to aim precisely. The numbers on the rifle scope can help you use this tool for this outcome. There are numbers on the side of the lens that state the size of the lens and how much it magnifies. When looking at the scope, the first number you will see is the magnification power. For instance, if the scope says 4 X 32, it means the scope can magnify the image viewed to four times through the scope. A scope that says 6 X 32 would magnify the image six times over the naked eye. There are also variable magnification scopes that may say something like 4-12 X 32, meaning the scope may magnify between four and 12 times the naked eye. The number after the X is always the size of the objective lens in millimeters so a scope of 4 X 32 has a 32 millimeter lens with 4 times magnification.

On a side note, if a scope magnifies from 4–16 times, for example, it is referred to as a four-power scope, while a 3–15 scope is a five-power scope, and a 2–6 would be a three-power scope.

Additional Figures
While the examples listed above are the main numbers found on a scope, some retailers or manufacturers will have other figures in the mix that you need to know. Here is a brief breakdown of the additional numbers you are likely to run across when looking at various scopes:

Parallax
While it is sometimes incorrectly called focus, parallax occurs when the image passing through the first set of lenses isn’t projected correctly onto the rear lenses, creating possible accuracy issues. This can be tested for by bobbing your head around while looking through the scope. If the crosshairs move around on the target, you have parallax and you will need to adjust it until the crosshairs move as little as possible. Parallax is more of an issue at close ranges, the ranges that airgunners tend to shoot at most, so the ability of a scope to adjust at these distances is very important. Ideally, the scope will adjust for parallax down to at least 10-15 yards, but some only go down to 25 or 50 yards, and some are fixed at a certain distance, often 150 yards. These scopes won’t work well for airguns!

Exit Pupil
Another common figure you may see on a scope is the exit pupil. This is the diameter of the circle of light leaving the scope and entering the eye. To figure out this number in more concrete terms, a smaller exit pupil means the iris won’t be filled with light and creates a dimmer image while a large exit pupil will be too large which wastes the available light. For comparison, the human iris is around 2-3 millimeters in daylight, 5mm in low light, and around 6mm in near darkness.

Eye Relief
Another scope number you may see is called eye relief. This is basically how close your eye needs to be to the eyepiece of the scope to see the full field of vision indicated. Why does this figure matter when choosing a scope? For starters, if you are shooting something with a lot of recoil then you don’t want an eye relief requiring your eye or your glasses to be right up against the eyepiece of the scope to avoid injury or discomfort. The higher the number on the scope for this aspect, the more space allowed between your eye and the eyepiece without losing the field of vision of the object so always check this figure when examining scopes.

Weight
This is how much the scope weighs on its own and is important to know. You need to know the weight of the scope to avoid adding too much weight to what you carry or creating an imbalance in your rifle. While most scopes are made to be lightweight by default, there are some models carrying more weight so it’s still a good idea to check this when listed. It is shown in either ounces or kilograms, depending on the manufacturer.

Now that you know what the numbers mean, you are ready to find the right scope for your preferences and get back to shooting! 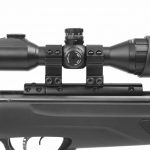