Are Electronic Airguns a Hit or a Miss?

Normal airguns are all run by typical mechanical actions like bolts, springs, hammers, and valves.  And then there are “next-gen” airguns that use a blend of electronics and micro switches.  These new airguns have raised many questions about their durability in the field, longevity, and straight-up fairness in competitions.  Since we love airguns, we guess it’s time to dive into the world of electronic airguns.  Let’s get started.

Electronic Airguns Are Not New!

The Benjamin Rogue was a .357 airgun with an intelligent valving system. Shooters could “dial in” the desired velocity, and the computer would deliver the right amount of air and volume to make it happen. However, the system was large, heavy, and unfortunately prone to technical difficulties. It lasted a while but was eventually shelved.

Today’s electronic airguns have traded the mechanical triggers for microswitches at the end of the travel. They are adjustable for travel and pull weight, and it all terminates with a “click” of a tiny switch at the end.  The cocking lever doesn’t pull back a spring and hammer, but cycles the pellet pusher that seats the pellet into the breach, and there’s another microswitch that lets the computer know that the gun’s been cocked and is ready to fire.

Computers run the valves and come from the factory with 3 primary power settings. These are low, medium, and high.  The regulator and valve are tuned to try and deliver consistently accurate shots as long as the pressure in the bottle is above the power setting. The computer tracks shot count and pressure, providing some very cool “real-time” data for shooters.  When the pressure drops below the necessary pressure for the selected power setting, the display reads “low pressure,” letting you know that you need to go top off.

These airguns are pushing the boundaries of airgunning for consistency and accuracy.  Daystate has their Red Wold and Delta Wolf airguns that fit this category.

What About the Long Term?

Well, to the folks who have shown durability concerns, they should check out some of the competitive shooters that swear by these airguns. They shoot them in all types of conditions, and they all seem to love what they bring to the table.

Having spent some time behind the trigger we can attest to the fact that electronic airguns are pretty awesome.  With no hammer or hammer spring, there’s no reciprocal energy to move the rifle during the shooting cycle.  The only thing the shooter feels is the slight recoil of the air pushing the pellet out of the barrel.  It’s pretty awesome.

Most recently, BARRA introduced the 400E.  I guess we should have seen the 400E coming down the road for some time now.  As mentioned above, airsoft airguns have been running electronic systems to propel plastic BBs down range for some time.  The 400E takes things to the next level.  Utilizing an electronic firing system, the plastic BBs have been replaced with traditional steel BBs.  Not only does the 400E shoot steel vs. plastic, but it’s also doing it at velocities that exceed 400 FPS.  That’s a lot of velocity from an electronic steel BB gun.

We don’t know what’s next for airgun electronics, but the early learning curve and lessons learned from the Rouge have inspired manufacturers to take a hard look at the benefits.  And, if the BARRA 400E is anything to go by, we haven’t seen the last of electronic airguns. Rather, we are just starting to see their coming of age.  As fellow airgunners, we are excited to see some more advanced airguns right around the corner, and we can’t wait. 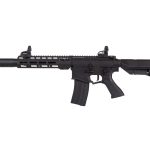 Normal airguns are all run by typical mechanical actions like bolts, springs, hammers, and valves.  And then there are “next-gen” airguns that use a blend of electronics and micro switches.  These new airguns have raised many questions about their durability in the field, longevity, and straight-up fairness in competitions.  Since we love airguns, we guess […]