There are many forms of competitive shooting that center around airguns.  These primarily start with a focus on youth shooting programs, which can extend into college scholarships, and even a trip to the Olympics. But are there any options for adults? The short answer is yes.

For those looking for ultimate precision, you have bench rest competitions that feature distances from 25 meters out to 100 meters.  For those shooters looking for something a bit more challenging, there’s Field Target.

The basic concept around field target is to create simulated hunting scenarios requiring shooters to hit kill zones that vary in size, at varying angles, while at different distances.  Airguns are about precision shot placement, and Field Target Competitions are designed to test a shooter’s skill at just that.

Targets consist of steel mock-ups of various small game. The targets may be cut into the shape of rabbits, squirrels, crows, or other pests.  These targets have a “kill zone” which can be restricted to sizes ranging from .375 inches up to 2 inches depending on the match and the specific club rules.  When a shooter scores a hit, the target falls down and is easily reset by pulling a string.

Gamo makes some great personal knockdown targets that are very affordable for those who want to set up their own mini Field Target course in their back yard.

There are several governing bodies in Field Target.  Here in the US, you have the American Airgun Field Target Association (AAFTA).  Generally speaking, there are no “legal” limits to what airguns can produce for power here in the US, as there are in the UK and many other countries around the world.  To keep things competitive and to preserve the targets, the AAFTA imposes a 20 foot-pound limit and the airguns need to be either .177 or .22 caliber.

There’s no distinction of what kind of power plant has to be used.  Shooters can shoot spring or gas ram guns, multi-pump pneumatic airguns, PCPs, or even CO2 airguns if they want to give them a try.  To be competitive however, most shooters go with a PCP specifically designed for Field Target.  These guns will typically have highly customizable stocks, regulators, be fairly large and heavy for stability, etc.  Field Target air rifles are not your typical “off the shelf” airgun that you’ll find in a big box store.

Here’s where things get interesting.  The AAFTA has different classes in which shooters can compete.  Each class will have slightly different rules governing optics and how they can be used.

The Open Division lets shooters have the most “fun,” allowing any type of site to be used any way they like.

In the Hunter Division, shooters can use up to 16x magnification and cannot make any “click” adjustments during the match. They can change the magnification, and they can use a parallax adjustment to bring the target into focus.

Lastly, there’s the World Field Target Federation (WFTF) Division.  The WFTF created a common set of rules so that shooters around the world can compete together for world matches. Under WFTF rules, shooters can use any optic they like, however they want, provided there are no integrated electronic aids.

Matches are set up at the full discretion of the Match Director.  Generally, you’ll have “lanes” consisting of 2 to 3 targets placed at different ranges (from 10 to 55 yards) and various shooting angles.  Matches can run for one day or many days, depending on the event.  Shooters advance from lane to lane, scoring hits as “1” and misses as “0”.

If having tiny kill zones, varying ranges, and other restrictions isn’t enough of a challenge, shooters can be required to shoot in “forced shooting positions.”  If required, these will be identified at each lane and may consist of; kneeling and offhand.  If a position is not specified, then shooters can use any permitted shooting position related to their class.

Are We Having Fun Yet?

Field Target is an exciting and highly competitive airgun shooting discipline.  It separates the real “shooters” from the “talkers.”  While the equipment certainly plays a significant role, it’s far more about the skill of the shooter than the equipment.  In the end, it’s all about what AAFTA says:

“Field Target… It’s all about having fun” 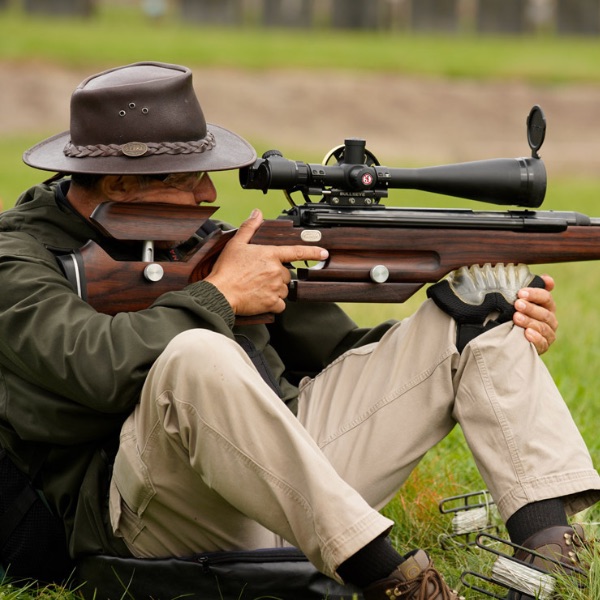 There are many forms of competitive shooting that center around airguns.  These primarily start with a focus on youth shooting programs, which can extend into college scholarships, and even a trip to the Olympics. But are there any options for adults? The short answer is yes. For those looking for ultimate precision, you have bench rest […]