Two of the best budget CO2 revolvers face off!

Its the bout of the century… or at least of the month! In a battle of both form and function we pit two of the best priced, large frame CO2 revolvers in against each other two see who comes out on top!

In the red corner we have the Crosman Vigilante 357 Air Pistol. Not only one of the best selling air pistols of all time but one of the best selling air guns of all time, period. This tried and true revolver weighs in at 1.7 lbs and features a modern design with top and bottom picatinny rails to mount accessories to your hearts content. The Vigilante is the reigning champion when it comes to CO2 powered revolvers. 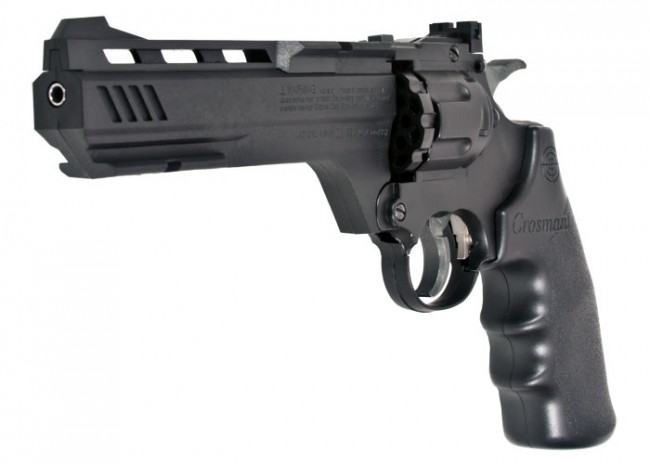 In the blue corner, weighing in at 1.25 lbs, we have the new kid on the block, the Colt Python Polymer Air Pistol from Umarex USA. This BB only revolver is ready to rumble and prove that it’s a true contender in the CO2 revolver bracket. The Pythons traditional frame and Colt markings make it stand out in a world of clones. 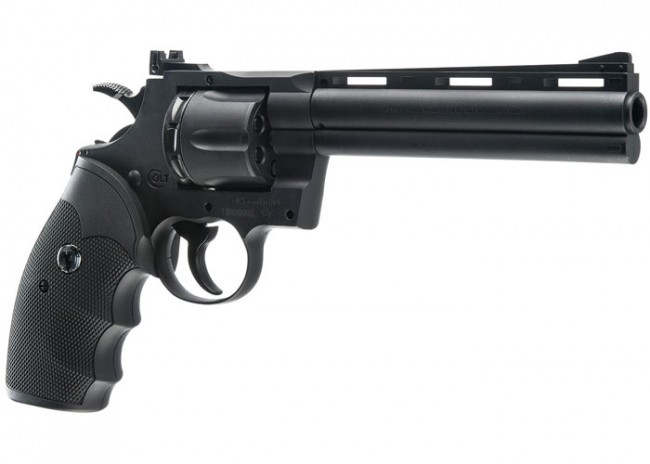 The Vigilante is a modern take on a classic design, with cues being taken from the classic Crosman 357 pistols that were first manufactured in 1983. Since then, to keep up with the times, the addition of picatinny rails and a slab sided barrel bring the Vigilante into the modern era. The Vigilantes break top frame make it easy and fast to load the rotary magazines. The grip frame is large and fills your hand well however the grip panels themselves are a bit plasticy and feel somewhat cheap. The frame of the Vigilante is metal and adds to the realistic heft of the pistol

The Colt Python Revolver has an all polymer frame with metal internals. the grip frame of the Python is smaller and much narrower than that of the Vigilante, this may make it a better option for shooters with smaller hands, but in our opinion it does not feel as nice in the hand as the Vigilante. The grip panels of the Python Polymer are plastic as well, however they are aggressively textured and fit to the frame well making them easy to grip, the added Colt prancing pony logo is a nice touch.

Winner: They both are very nice looking guns and each is built well for its price bracket, but the Vigilante wins this round with its metal frame and better in hand fit takes the victory on this round.

The Python runs away with it a bit here. The trigger on the Python is very smooth in double action and crisp and light in single action. The trigger blade itself is fairly narrow when compared to that of the Crosman Vigilante and does feature some minimal texturing lines to give some tactile feel to the trigger.

The Vigilante trigger is heavy and long but predictable in double action. Staging the trigger is fairly easy and conducive to good shooting however the single action pull does have some take up and breaks a bit spongy. The trigger blade is very wide and helps with the heavy trigger pull and the beveled contours are a nice touch.

Winner: While both triggers are adequate, the Python is a clear winner in this round with a smooth and realistic trigger pull that are hard to beat.

To level the playing field, for this round we’re only comparing BBs fired out of the Vigilante. And since we’re dealing with CO2 pistols we’ll keep the distance at 10m.  The BB accuracy of the Crosman Vigilante was nominal with a grouping of 3.04 inches firing BB’s at 10m. The smoothbore Coly Polymer Python pistol shot an acceptable 2.4 inch group at 10m and is perfectly capable for backyard plinking or fun shoots where precise accuracy is not necessary.

Winner: Seems the rifled bore doesn’t help with BB firing rounds for the Vigilante as the Python staggers away with a slight win in this round. But nothing to write home about with these groupings, then again, we are dealing with BBs.

Average velocity out of a 5 shot string with the Vigilante was 386 FPS with BB’s and 365 FPS with 7.4 grain pellets. A bit below the advertised 435 FPS claimed by Crosman. The Colt Python on the other hand averaged 412 FPS over a 5 shot string, actually a tad higher than advertised.

The Colt Python Polymer wins another round, but then again, we’re talking about Velocities on a CO2 powered hand gun, not really a make it or break it need for this class of gun. You get the feeling the Vigilante is just waiting to unleash on the Python.

The Vigilante uses a dual mag system. One for BB’s and another for pellets. This extra utility makes the Vigilante 357 a great value as it can fire just about any ammo you have on hand. The pellet mags hold 10 rounds while the bb mags hold only 6. Both mags functioned perfectly and were easy to load. The retention of both mags was great and no bb’s or pellets fell out after loading. Plus the crack open loading of the Vigilante is pretty awesome.

The Colt Python Polymer only has the option to fire BB’s, so pellets are out of the question. The capacity of the magazine is 10 rounds which is nice so you don’t spend all day loading and not shooting. It’s also nice that Colt gives you three clips out of the box. Loading the magazine was very easy however the mag did have some retention issues and a few bb’s fell out of the magazine after it was loaded into the pistol

Winner: Once again the old standard takes the cake, The Vigilante with its dual ammo capacity and proven design wins this round handily. The Colt is starting to look a bit punch drunk after that round…

Unleashing pellets through the rifled barrel really shows that the Vigilante 357 air pistol is a tack driver. The resulting grouping at 10m is right at .84 inches. Impressive, and shows that this pistol is primarily made to shoot pellets. The Python just can’t stack up in this area, and gets knocked out by the Vigilante’s pellet power.

Once again it seems that the Vigilante has come out on top and remains the champion in the middleweight CO2 revolver class. It’s hard to beat such a classic gun with proven performance and the versatility to fire both BB’s and pellets. However, don’t count out the Python completely, it’s a great little gun with lots of potential, maybe the powers that be at Umarex will release a dual ammo version of the Python as well and we can revisit this bout between the two rivals, but for now the Crosman Vigilante is still on top. 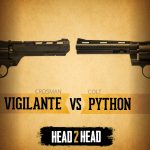 Its the bout of the century… or at least of the month! In a battle of both form and function we pit two of the best priced, large frame CO2 revolvers in against each other two see who comes out on top!   In the red corner we have the Crosman Vigilante 357 Air Pistol. […]