Two PCP rifles face off in the Super Middleweight Division

This weeks matchup is a sparing match between the Benjamin Marauder and the BSA Buccaneer. Each of these two PCP contenders is vying to be at the top of the table when it comes to high value PCP’s. Its a matchup of the USA vs. Great Britain in today’s head to head.

In the blue corner, weighing in at 8.2 lbs is the Marauder (wood stock version, commonly referred to as the M-Rod), a solid, made in America workhorse. Assembled in East Bloomfield, NY, the M-Rod took the PCP world by storm when it was released in 2009. Available in .177,.22, and .25 caliber the Marauder is a great all around airgun and has been one of the top selling PCP’s since its inception.

In the red corner, hailing all the way from Birmingham, England, weighing in at a stout 7.9 lbs, its the BSA Buccaneer SE. The Buccaneer carries with it all the long and storied history of the Birmingham Arms Company and comes from a long pedigree of fine air guns. The Buccaneer, also available in .177,.22 and .25 calibers is unique in that its reservoir hold up to 232 BAR (3365 PSI),  rather than most standard air rifles that only hold 200 BAR. This extra capacity gives the BSA Buccaneer more shots per fill and less drop off between shots, but is it enough to unseat the dominant Marauder as the leader in the PCP game?

The Marauder is available in wood or synthetic stocks to give you just the look and feel that you are after. The Marauders steel breech houses a cock on opening bolt that can be switched from a right to left hand configuration by a certified air gun tech or at the factory when you order your rifle. The Marauder also features a 20 inch fully shrouded and baffled barrel that is sure to play a part in our sound comparison.  The .177 and .22 versions fire from 10 shot rotary magazines and the .25 version fires from an 8 shot mag. Our test rifle for this comparison was a .22 caliber synthetic model.

The Buccaneer feature a Beech wood stock available in 2 finishes, a dark natural stain finish for the more traditional shooter and a black rubberized all-weather finish for those who are looking for a durable, hard use rifle. The Buccaneer features a 18.5 inch un-shrouded cold hammer forged steel barrel with a threaded muzzle and included muzzle break. Similarly the magazines hold the same amount of pellets. One place where the Buccaneer gets a leg up is the user serviceable bolt, that can easily be switched from right to left handed by the end user.

Winner: Holding the rifles in hand the BSA definitely has a sturdier feel in our opinion and the user serviceable bolt is a really nice feature, however the Marauders synthetic stock option is great for keeping weight down, especially if you’re taking it out hunting (the Buccaneer doesn’t have sling studs either that seems an oversight). Not letting the shrouded barrel be a factor since that will be judged later, the Marauder still wins this round!

The Marauder trigger has become a favorite among airgunners. The adjustable 2 stage match trigger is very conducive to accurate shooting. The first stage pulls very light and there is a very definite stop or wall between the first and second stage. The second stage, out of the box pulls at about 3.5 pounds and breaks like a candy cane.

The Buccaneer trigger is also a 2 stage adjustable design. Out of the box the first stage is extremely light and short. The second stage pulls at a similar 3 to 3.5 pounds however there was a bit of noticeable creep in the second stage as well as a somewhat mushy break. The Buccaneer trigger is suitable and feels just fine when making quick shots in the field however when shooting from a rested position we noticed that the trigger did make it hard to get a good slow press to achieve maximum accuracy.

Winner: In our eyes the Marauder is an easy choice here and takes the round!

To make it a fair fight we tested the exact same pellets in both guns. The Marauder put up some very respectable power numbers with a number of different pellets, and was able to obtain just under 25 ft-lbs with the JSB Diabolo Exact Jumbo Heavy, a 18.13 grain pellet. We then switched over to try the same pellets in the BSA Buccaneer. The Buccaneer really ran away with things here. The BSA made some great power numbers, breaking the 30 ft-lbs mark with the same JSB Jumbo Heavy’s that the M-Rod could only reach 25 ft-lbs with. It was even able to push Polymag Shorts to just under the 30 ft-lbs mark. 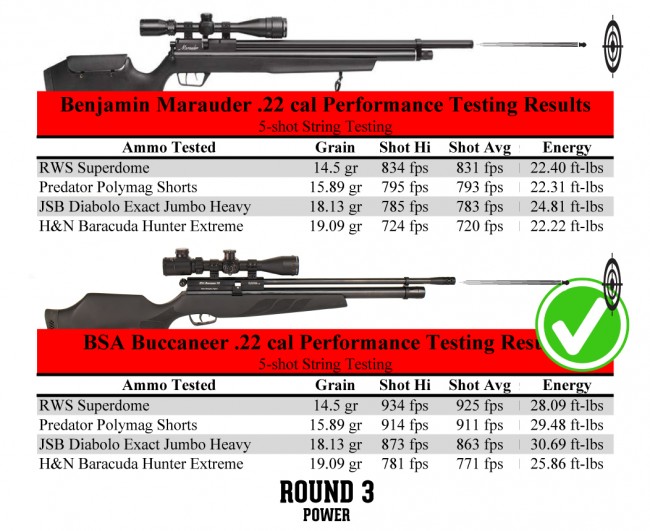 Winner: The 232 bar reservoir seems to really do it’s job as the Buccaneer is the clear winner this round really landing the established Marauder a blow. This little Buc packs a real punch and gives you extra knockdown power when you need it. And yes we’re christening the nickname “Buc” for the Buccaneer after seeing the power this gun puts out. Plus it’s a lot easier to spell!

Since we’re dealing with pre-charged pneumatics, we set out to test the gun’s accuracy at 50 yards. Accuracy between these two guns was really a wash, at 50 yards they both turned in some sub-1 inch groups depending on the pellets that were being fired. Both the M-Rod and the Buc seemed to really like the newer shortened PCP-mag-friendly Predator Polymag Shorts. Given an opportunity it would be interesting to see if the accuracy of the Buc’s cold hammer forged barrel is as good as some say it is (some gunsmiths swear it’s a better process than button-forging). Especially since the Buccaneer is pushing more air…

Winner: This round is really a draw as both guns shot excellent groups, especially with the Polymag shorts. Perhaps during another bout we can see what the guns do at 75 yards to determine who can pull away in this category.

While neither stock gun comes with a scope. Both manufacturers have passed on a good amount of value by offering Airgun Depot a scope to bundle with their gun. The Marauder bundle comes with a Centerpoint 4-16×40 AO scope ($94.95 value), the Buccaneer with a BSA Contender 4-16×40 RGB IR Scope ($179.99 value).

Really this round has to be called as another draw, as both scopes are serviceable, however neither really stood out as better than the other. The Centerpoint has a good clear picture but the adjustments seemed a little off and made it a bit of a chore to get it dead on zeroed. The BSA scope adjusted easily and the locking zero stop is a nice feature as well as the included sun shade, however the glass quality was not as good and had a bit of a yellow haze.

Winner: Let’s just call this one a draw since your own personal preference on features vs clarity makes this too subjective to call.

The Marauder’s shrouded and baffled barrel really keeps things quiet. We saw consistent readings of 68 dB. That makes the Marauder a great gun for the woods so you don’t scare away game. Or if you have a large backyard it’s quiet enough to shoot without bothering the neighbors. On the other hand the Buccaneer was loud! Its un-shrouded barrel provides no sound suppression. We saw readings up to 85 dB, more akin to the sound of a passing diesel truck. However we recently learned that a shrouded version of the Buccaneer is on the way and once it gets here, it will be time for a rematch.

Winner: This is where the upstart Buccaneer really doesn’t have a chance while it’s waiting for its suppression upgrade. Probably why the English lads only asked for a sparring match instead of a title fight. The clear cut winner of both the round and the match: The Marauder… for now.

After its all said and done the Marauder is still the reigning champ when it comes to the entry level PCP air rifle market, however, that doesn’t mean that the BSA Buccaneer isn’t a good option. The BSA is an extremely well built and powerful rifle, and as improvements are made (cough…the shroud..cough, cough…) I think that it will make a great starter PCP for those that are looking for a bit of heirloom quality in their air rifle. It’s nice to finally see other manufacturers challenge Crosman for a price segment that has really only had one option until recently. Competition only makes everyone better so we say, bring it on. And look for a rematch between these two guns when the Shrouded Buc comes out this fall. 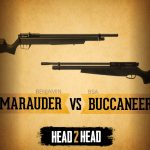 This weeks matchup is a sparing match between the Benjamin Marauder and the BSA Buccaneer. Each of these two PCP contenders is vying to be at the top of the table when it comes to high value PCP’s. Its a matchup of the USA vs. Great Britain in today’s head to head. In the blue […]