Welcome to this Head to Head, we have an exciting match for you today! In the red corner, coming from Barcelona, Spain, is the Gamo Swarm Maxxim! A light break barrel, sporting a ten shot repeating magazine, it is going to be hard to beat.

In the blue corner, coming to us from Arnsberg, Germany, is the Walther Terrus! It is the most affordable example of a top quality German springer, and while it is only a single shot, this tough Teuton is confident of the win.

The Gamo Swarm Maxxim comes into this round as the underdog, and a superficial look at the repeater action with its bouncy, lumpy, jiggly bit on top (otherwise known as the 10X Quick-Shot Rotary Mag System) might give you the idea that it isn’t well built, but looks can be deceiving. The loading mechanism has loose tolerances the way an AK47 does: the parts fit loosely, but work every time! And very affordable spare magazines will keep you shooting. The stock is synthetic but isn’t hollow sounding, and stippling on forestock and grip ensure a good grip. With the stock removed you see that the breech has a pin that appears to be adjustable so you can keep it tight over time.

The Swarm’s powerplant is Gamo’s IGT piston or Inert Gas Technology, in other words, a nitrogen-filled gas piston. This gas ram gives you less hold sensitivity, and in fact our best groups were shot with the gun rested directly on the bag.

The Terrus isn’t giving any ground in this round, and the proud German engineering behind it shows. The chisel lockup of the barrel is rock solid. The breech has a cross bolt that can be tightened without taking the gun out of the stock, ensuring that accuracy won’t diminish with time and wear. The synthetic stock is solid, and the stippling and curves ensure a good grip even when wet. The stock feels good and doesn’t ring hollow. And the option for a beech stock is an advantage of the Terrus, although you will pay a little more. (Come on Gamo, we know you have wood versions. Let us have them!)

The Terrus weighs in at 7.56 pounds, so it is almost two pounds heavier than the Gamo, and is a little shorter at 44.25 inches.

The Terrus gets its power from a traditional coiled steel spring, and because of this there is more hold sensitivity than with the Swarm, although it’s not a very hold sensitive gun. It also means that there are more options for tuning the gun.

The build quality and feel of the Terrus is better, but the Swarm is much lighter and the repeating mag is awesome! We’re calling round one a tie!

However the Gamo Swarm lands a solid one by having a trigger that breaks at 2lbs 6oz, while the trigger of the Terrus breaks at an extremely consistent but heavier 3lbs 0.6oz But the Terrus returns the blow by having a cleaner and more predictable break. Neither trigger is match grade, but for the price range both are pretty good, with the edge going to the Gamo. The Swarm Maxxim takes round two!

Out of the Terrus, GTOs averaged 745 fps with an extreme spread of only 8fps and a standard deviation of 3fps. That is very consistent, more so than most regulated PCPs! (On my broken-in gun I have had even more consistent strings.) The Gamo is more powerful, but the Terrus is more consistent. In our opinion, these two equal each other out, and round three is a tie!

This round had us on the edge of our seats because going into it we knew that both guns were accurate, but we were still surprised by the results! The Gamo put 10 rounds into a hole measuring 0.46 in center to center. This is smoking accuracy for a ten-shot group from a break barrel at 35 yards!

The Terrus is famous for its accuracy and it did not disappoint. It put nine out of ten pellets in a group that measured 0.40″center to center. But one pellet opened the group up to 0.53″. In a rematch it could easily go the other way, but round four goes to the Gamo Swarm!

The Swarm Maxxim has Gamo’s Whisper Maxxim Technology that we have seen on other guns and it typically works well, although with springers much of the noise is mechanical and not from the muzzle. This is illustrated by the fact that the Gamo registered a high of 84.6db and the Terrus a high of 84.1db. So even without any sound suppression, the Terrus was a touch quieter. The Terrus is threaded for a silencer, but it probably isn’t worth putting one on. They are both so close that round five is a tie!

The Red Fury from Spain is light on his feet! In each round he swarmed the Terrus, landing punch after punch, giving him no room to breathe. His ten shot magazine that loads with only a break of the barrel seemed unfair. We consulted the rules of the Marquess of Queensbury and there is nothing that prohibits it, so the fight went on! Both guns break easily and cock without much effort, and the Terrus, like most break barrels, loads fairly easily, but the ten shot repeating capability of the Swarm had its effect on the Terrus. The 10X Quick-Shot Rotary Mag System is absolutely reliable (at least in our .22 cal. testing) and makes shooting this gun a pleasure never before experienced with a break barrel!

These unrelenting body blows wore down the slower German and round six goes to the Swarm Maxxim!

AND THE WINNER IS THE GAMO SWARM MAXXIM!

Both of these are great guns and you will be happy with either. I own two Terrus’s and love their accuracy, consistency, and feel of German quality. On the other hand, it is hard to overpraise the repeating mechanism on the .22 Swarm. Here are some further considerations:

Do you have either or both of these guns? Tell us about your experience with them below. 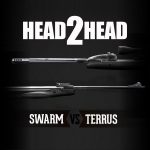 Welcome to this Head to Head, we have an exciting match for you today! In the red corner, coming from Barcelona, Spain, is the Gamo Swarm Maxxim! A light break barrel, sporting a ten shot repeating magazine, it is going to be hard to beat. In the blue corner, coming to us from Arnsberg, Germany, […]