Now that winter is behind us, and the warmth, sights, and smell of spring is in the air, we thought we’d pit two of our favorite CO2 plinkers. Call it the Super Flyweight CO2 Rifle Division. Both of these single shot CO2 rifles are known for their accuracy, simple reliability, and for having a plethora of aftermarket parts. They also happen to be some of our favorite guns for young shooters to hone their skills on. Without further ado, let’s meet our two contenders.

In the red corner weighing in at 6.2 lbs, a gun with a stout following and a well-documented history of performance, we have the QB78 Deluxe in .22 caliber. The QB78 is a popular platform for modifying and can be set up in anything from a mild plinker to a wild one off custom. The simple action and trigger mechanism was derived from an earlier Crosman design and has since gone on to be used as the starting point for many popular airguns. The QB has been there and done it all.

In the blue corner weighing in at 4.7 lbs, and sharing much of the same heritage as its competitor, is the Sheridan 2260 MB. The Sheridan is the great great grandson of the Crosman 160 (which the QB is also derived from), it also shares an action and trigger with its big brother the Benjamin Discovery. This lightweight rifle has been a go to rifle for new and younger shooters for quite some time. With both these rifles being so similar it’s sure to be a close fight to see which come out on top. Let get em in the ring and get after it!

The quality and construction of the QB78 Deluxe while mostly utilitarian, is designed with the shooter in mind. The hardwood stock features a raised cheek pad that lends well to getting a good cheek weld. The forend in fairly narrow which makes it nice for shooters with smaller hands. The length of pull is fairly short as well. The trigger guard, trigger,  breech, and bolt handle are all metal adding extra durability. The QB barrels are button rifled from a solid bar stock blank making for a very rigid and accurate shooting barrel. One of our favorite features of the QB Deluxe models are the fiber optic sites they are easy to pick up and make for a great sight picture so if you are working on getting better with open sights or you are teaching someone new to shooting it is a great option. Overall the QB is well built and has many features that you would not expect to find on a rifle at this price point.

The Sheridan is very similarly appointed with a few key differences. The stock is a bit more ergonomic, the forend has a larger palm swell and the cheek riser is a little higher. This makes shouldering the rifle a bit more comfortable. The barrel is also cut from one piece of steel however it is a much lighter profile than the QB barrel. The breech and bolt are both steel as well and the barrel is finished in a dark bluing. The Sheridan features a standard blade front sight and a buckhorn rear sight, both are black plastic and the rear is adjustable for both height and windage. The sights are not marked with sight paint or fiber optics and are a little bit harder to pick up (especially on darker targets and backgrounds). The trigger and trigger guard are both molded plastic, and though they may not be as durable as metal they should hold up well.

Winner: These two guns are so similar it’s hard to call one a winner and one a loser but since we need to pick one, the winner is the QB78 Deluxe. Though the Sheridan has a slightly nicer stock, the metal trigger and trigger guard, as well as the fiber optic sights of the QB, set it ahead of the Sheridan.

The QB78 Deluxe trigger is a single stage adjustable. From the factory the pull is long and spongy but not overly heavy. With some practice it can be shot well. Adjusting the QB trigger requires that the trigger be dismantled to access the adjustment screws. Once it’s apart it can be adjusted for both length of pull, pull weight, and over travel. The QB trigger out of the box is not one that we would call “good” but it is shootable, and with the ability to adjust it, it can be tuned to be a great shooting trigger.

The Sheridan shares the same trigger as the Benjamin Discovery and as such there are many well-documented methods for tuning it, however, they do require some modification. Out of the box, the trigger is shootable but has a much more clunky feel than that of the QB. It’s almost hard to describe as there is not really a definable break with the Sheridan trigger, the pull starts off light and gets heavier just before the trigger breaks. With some practice you can stage the trigger and shoot very accurately with the Sheridan but it does take some getting used to.

Winner: This one goes to the QB, the cleaner break and the addition of a metal trigger and guard push it ahead of the Sheridan.

We did this round in two different stages, first we tested the accuracy with open sights at 35 yards and then we mounted a Hawk 4×32 fixed power scope and fired again for accuracy. We used the same JSB Jumbo Match 13.73 grain pellets in both rifles for the test firing. All shots were fired from a Caldwell DeadShot FieldPod.

Winner: The Sheridan takes this round easily. We found that the buckhorn style sights were a little harder to pick up when acquiring the initial sight picture, however, the Sheridan sights are quite a bit finer than those of the QB and made repeatable accuracy a bit easier. Scoped the Sheridan still held a tighter group, though with some work the QB could easily shoot the same type of groups as the Sheridan.

Winner: The QB easily takes this round with is double CO2 cartridge system. You can shoot for a few hours without having to change CO2 cartridges, that being said, with both the QB and the Sheridan leaving CO2 in them for long periods of time is not recommended. So if you are looking to shoot just a few rounds and put the gun up the Sheridan may be a better option.

As of the writing of this post, the QB78 Deluxe comes in at $105.99, what is amazing is that’s almost $50 less of than the standard price tag of the Sheridan. That puts the QB squarely in the range of affordability for just about any shooter. And a big plus is that the QB has a plethora of aftermarket parts & mods so you can spend some of that saved cash to trick out your QB and make it an even more incredible shooter. The QB Series tune kit is a great option to pick up as you can squeeze little more power out of the QB rifles (up to 100 fps more), you could also go for a QB 79 (the bulk fill version of the 78) coupled with a Ninja Regulated HPA Tank , which puts you into the PCP game for right around $200.00.

Winner Once again the QB takes this round! The value for cash spent on the QB is pretty great.

Round Winner:  It would seem that the QB tops the Sheridan in almost every category, but with these rifles being so similar it’s hard to really say that one is better than the other. I think that they both have their advantages and disadvantages but considering that the QB is almost $50 less it’s easy for me to recommend it over the Sheridan. The QB continues to be one of the best shooting and best valued guns on the market, and is certainly one of our favorite rifles for young and new shooters alike! 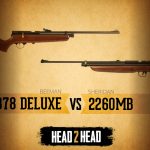 Now that winter is behind us, and the warmth, sights, and smell of spring is in the air, we thought we’d pit two of our favorite CO2 plinkers. Call it the Super Flyweight CO2 Rifle Division. Both of these single shot CO2 rifles are known for their accuracy, simple reliability, and for having a plethora […]