It’s no secret that around here at Airgun Depot we are fans of JSB pellets. Truth be told, why wouldn’t we be? We have had some great results running JSB ammunition in just about every gun that we have tested. JSB is a brand that most airgunners have come to trust when it comes to high quality ammo, and sure, guns can be picky about pellets, but for the most part we have had good luck with JSB ammo and they have become are go to pellet for testing new guns. Well, now the tables have turned a little bit, instead of testing guns with JSB pellets, we are using a few different guns to test some new pellets from JSB/Predator. All of these new pellets have been designed with hunters in mind and should produce some pretty interesting results. And with JSB’s track record it’s safe to say these will quickly become some of our favorite hunting pellets.

The Ultra Shock, available in both .22 and .177 calibers, was designed with hunters in mind. Weighing 25.4 grains in .22 caliber and 10.3 grains in .177 these pellets are fairly heavy for these calibers and well suited for taking game. The design of these pellets lends well to use in rotary magazines and we had no problems in Benjamin Marauder or Hatsan mags, however, they did hang up a little bit in our Air Arms S510. To give an idea of what kind of velocities that we were getting we fired a 10 shot string over our chronograph with 3 different guns, an AirForce Talon SS, a Hatsan AT-44, and a Benjamin Marauder all in .22 caliber, take a look at the results:

Since this pellet is targeted at hunters (pun intended) we thought it would be interesting to test the penetration and expansion ability of the JSB Ultra Shock. For this test we used a block of ClearBallistics 10% FBI spec ballistics gelatin. We fired the pellets from a distance of 10 meters directly into the block. We chose to use the Talon SS as it gave the highest velocity and ft/lbs rating for any single shot. Of course we are not trying to be too scientific here, we are by no means experts in the field of ballistics but it was still really interesting to see how the pellets performed.

The Ultrashock penetrated just under 9 inches into the gelatin and created a nice cavity as it traveled through the block. We are sure that this is quite a bit deeper that what you would expect to see on actual game as we were only 10 meters from the block itself but the result is still impressive to say the least. Next, we cut the pellet out of the block to compare it to an unfired round to see what kind of expansion the Ultra Shock was getting.

Surprisingly the fired JSB Ultra Shock on the right did not expand as much as we would have hoped however it did retain almost all of its original mass. Overall we thought that the Ultrashock was a well designed pellet, and though it did not expand, its broad striking face still was able to limit the penetration of the pellet so that a maximum amount of energy could be transferred to the target. The Ultra Shock cycled very smoothly in all guns tested and we would definitely recommend it to those who are looking for a new hunting pellet for their rifle.

The Beast is a perfect name for this pellet. This thing is really something else. Weighing in at 33.956 grains the JSB Jumbo Beast is the heaviest .22 cal pellet from JSB to date and man does this thing move. In order to get the pellet up to the desired weight, the folks over at JSB basically had to make the pellet longer than your standard .22. This means that for many magazine fed PCP’s the Jumbo Beasts will not work. We tried it in the Marauder, Hatsan, AirArms, and Gamo/BSA magazines with no luck getting it to work. We were able to fire them from the Marauder with the use of the Air Venturi single shot tray with good results. The Beasts worked exceptionally well in AirForce rifles, we tested both the Talon SS and an un-shrouded Condor with impressive results:

The results from the Condor were simply awesome! The Condor used for this test was brand new, literally came off the shelf and went straight to the range. We almost couldn’t believe it. After topping the tank off we reconfirmed with similar results. 75 ft/lbs from a .22 caliber, what an awesome pellet! We figured we had better subject it to the same gel test as the Ultra Shock.

From the 10 meter mark of our test range the JSB Beast was fired again from the Talon SS just as it was fired with the JSB Ultra Shocks. This time however, the JSB Jumbo Beast slammed through the block and kept on going, We repeated the test, this time with an 18″ long block and got the same result, a straight pass through. The power of these JSBs at high speed is very impressive. We have yet to test the Beast at longer ranges but we want to try and catch one of these pellets in gel and see what kind of expansion if any occurs. Overall the Beast is a great pellet for those that are looking for a longer range pellet that will buck the wind a little better as well as those interested in reaching unheard of energy levels from a .22 caliber airgun. The Beast certainly carries a lot of energy and should be effective in the field. And it just may be the perfect pellet for any of your .22 caliber AirForce airguns.

This is one that we’ve been excited for since testing the new Hatsan Model 135 .30 caliber break barrel. The .30 cal Polymag is simply a bigger version of the popular PolyMag in standard calibers.  It brings some much needed diversity to a caliber that currently only has a few options. The Predator PolyMag .30 weighs in at 44.75 grains,which is the same weight as its JSB counterpart the JSB Diabolo Exact .30 cal. Because of the longer polymer tip, the PolyMag .30’s did not fit into the rotary magazines of the Hatsan Carnivore .30 or Evanix PCPs so our only chrony numbers for now come from testing with the Model 135 break barrel.

We compared the fired pellet to an unfired pellet and there was not much expansion with the PolyMag .30. This can mostly be attributed to the low velocity of the pellet as we have seen some good results from PolyMags in the smaller calibers from higher velocities. We’re excited to try these .30 cal Polymags in the new .30 caliber AirForce Texan that will be released this year.

These new pellets from JSB/Predator are some solid additions to their lineup. We’re most excited about the extra heavy Jumbo Beast, especially with some of the new upcoming guns, such as the Evanix REX and Huben K-1 that are supposedly capable of really high velocities. Pellet testing is something that we haven’t really done a lot of but it was interesting to see if pellets really react as advertised. What pellets would you like to see tested? As always, leave your suggestions in the comments below! 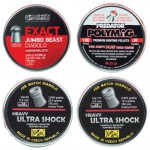 It’s no secret that around here at Airgun Depot we are fans of JSB pellets. Truth be told, why wouldn’t we be? We have had some great results running JSB ammunition in just about every gun that we have tested. JSB is a brand that most airgunners have come to trust when it comes to […]