Some folks may think that big bore airguns are a new thing and they couldn’t be more wrong.  Big bore airgunning has been around for hundreds of years and one of the biggest, most famous calibers is the venerable .50 caliber.  Not only is this the largest commercially produced airgun rifle caliber on the market, but it also comes in many different styles.  And, as diverse as the types of airguns chambered for .50 cal, so is the ammo that goes with them.

The Seneca Dragon Claw has been around for a very long time, inspiring and educating new airgunners about the wonders of big bore airguns.  In fact, the image and thought of the .50 cal Dragon Claw was a key element of many new airgunners personal fascinations with airguns, as they got started in the sport.  Moderately powered by today’s standards, producing around 230 foot-pounds, the Dragon Claw is simply beautiful to look at and even more fun to shoot.

As you move through the modern .50 cal airgun history, you find there have been entries and exits along the way.  Evanix created a multi-shot, magazine-fed .50 cal rifle called the Evanix Sniper.  While that model is no longer available, it inspired the tactical big bore revolution, opening the door for many new models.

Today you will find several manufacturers creating new and powerful airguns designed to propel .50 caliber airgun projectiles with massive power, range, and accuracy.  Airguns like the new AirForce Texan .50, are said to produce up to and over 800 foot-pounds.  Its in-line valve system provides a significant advantage, giving it a more direct line to the bore of the rifle and reduced weight by using the carbon fiber air reservoir as the buttstock.

Not all airguns chambered for .50 caliber are rifles though.  Seneca, the same manufacturer that makes the Dragon Claw, also makes a line of smoothbore air shotguns.  These impressive airguns not only shoot specially designed shot, but also round ball, cast ammo, and even .50 cal arrows.  Which is a perfect segway for the next part of this article.

So if you think the only thing that a .50 cal airgun can sling is hard cast round ball, you’d be sorely mistaken.  As mentioned earlier, the playing field for .50 cal airgun ammo is incredibly diverse.  Sure you have your traditional round ball, a favorite of the Seneca Dragon Claw, but you also have conical bullets in all shapes, sizes, weights, and composition.  Because manufacturers can create so much power from the .50 cal platform, they can really just go crazy when it comes to bullet design.

While some may think that the .50 caliber shotshells are about as wild as it gets, they really need to take a look at the Air Venturi Air Bolts.  Many other manufacturers chose to go the proprietary route and create airguns and arrows that only work with each other, Air Venturi chose to leverage existing technology to accomplish the same goal.  What caliber did they choose first?  You got it, .50 caliber.

The Air Venturi Air Bolts were born and they are some of the most lethal airgun projectiles currently on the market. When fired from the Seneca Dragon Claw, Wingshot, or Double Shot, these air arrows, weighing 430 grains with a 100 grain tip, fly at speeds in excess of 500 feet-per-second.   That’s over 230 foot-pounds of energy driving a razor-tipped arrow into your target.  The kill shot delivered by this combination is devastating, easily dropping big game like hog, deer, elk, and yes, even bison.

Is .50 Caliber the Most Versatile Airgun in the World?

The sheer volume of airguns and ammo options open a whole buffet of opportunities.

Want to learn more or find the right .50 caliber combination for your needs?  Just reach out to the folks at Airgun Depot and they will get you headed in the right direction. 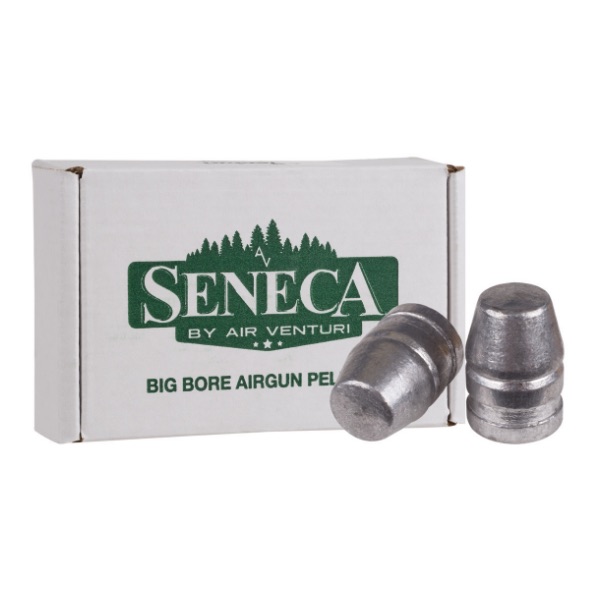 Some folks may think that big bore airguns are a new thing and they couldn’t be more wrong.  Big bore airgunning has been around for hundreds of years and one of the biggest, most famous calibers is the venerable .50 caliber.  Not only is this the largest commercially produced airgun rifle caliber on the market, […]