This is the fight that everyone has been asking for in the popular PCP Super Middleweight division. It’s the reigning champ again in the ring as more and more contenders enter the market vying for the belt as the best high value PCP in the sub $600 price range. What are we waiting for!? Let’s get to the ring!

In the blue corner, weighing in at 8.2 lbs, we have the reigning American champ, the Benji Beauty, the Benjamin Marauder. The PCP that brought serious airgunning to the masses. The Marauder has changed airgunning permanently. One of the best selling airguns since its inception in 2009, it continues to be the go to gun for many shooters. For this bout we have the synthetic M-rod, or Synrod for short, in a .22 caliber.

In the red corner, weighing in at 8.4 lbs, we have the European competitor, the Turkish Terror, the Hatsan AT44S-10 QE also in .22 caliber. The AT-44, while only available in the US under the Hatsan name since about 2011, has quickly gained a strong following of airgunners who revere it for its power and no-nonsense reliability. The AT-44 is a perfect match for the Marauder, but will it have what it takes to walk away with the title?

The synthetic Benjamin Marauder stock is both lightweight and rugged feeling at the same time. It features a wide, flat beavertail forend that makes it great for shooting off hand or off a bag. The pre-installed swivel studs are ready for your favorite sling so packing the Marauder in the field is easy. The breech, cocking, and trigger mechanism of the Marauder are all steel with a polymer trigger guard. The cock on opening style bolt can be switched from right to left handed and operates fairly smoothly. We did notice a little grittiness in the bolt and there were a few instances where we short cycled the bolt. Magazine capacity of the .177 versions and the .22 versions is 10 rounds, and 8 rounds for the .25. The barrel of the Marauder is rifled steel and is fully shrouded with a baffle system to reduce noise. Overall the synthetic Marauder is a no frills gun ready for action.

The Hatsan AT-44’s synthetic stock feels a bit plasticy compared to the Marauders, but what it lacks in feel it makes up for in features. The ambidextrous Monte Carlo stock features a similar wide flat forend but also has an integrated picatinny rail section for attaching bipods, the AT44 also comes with pre installed sling studs with swivels already included. The AT44 features a steel breech, a brass trigger, and a cast metal trigger guard. The AT44 also uses a super smooth side lever action that really is one of the best we have felt. The rifled 19.5 inch barrel features Hatsan’s Quiet Energy sound suppression system to keep things quiet. Magazines are simple rotary type and are easy to load, however they are narrow so longer pellets such as the standard Polymags are out of the question. Another great feature of the AT-44 is the removable air reservoir. A removable reservoir allows you to charge extra reservoirs so re-fueling in the field is as easy as changing out the air tubes.

Winner: With both guns being so low priced it’s hard to believe the quality that is offered in both guns, however the feature packed Hatsan AT44 takes this round. Sure the feel of the stock is a bit cheaper but with the smooth action, removable air cylinders, and added picatinny rail the AT44’s quality really shines.

What more can really be said about the Marauder trigger? It’s been a favorite of airgun shooters for some time now. The basic 2 stage fully adjustable design features a light first stage and a second stage break at about 2.46 lbs straight out of the box. The break is crisp and light but does have a fair amount of over-travel. The Hatsan’s trigger is no slouch either, and though it comes in a bit heavier at 4.6 oz the second stage break is extremely crisp with very little over-travel. The Hatsan trigger is fully adjustable for overall weight, as well as first and second stage length.

Winner: The Marauder would  take the win on this round based on out of the box pull weight alone, however the Hatsan trigger in our opinion is a much crisper break with almost no overtravel. Since it can be adjusted for weight the judges called this one a draw.

To see who could deliver the best knockout punch we tested the same pellets in both guns. The Marauder made some really good power with velocity reaching 783 fps with the JSB Diabolo Exact Jumbo Heavy. That sets the foot pounds at 24.81 ft-lbs. Perfectly acceptable for smaller and some medium game. The Hatsan on the other hand really slung those heavy 18.13 grain JSBs. The AT44 made 35.73 ft-lbs at a whopping average of 942 fps! 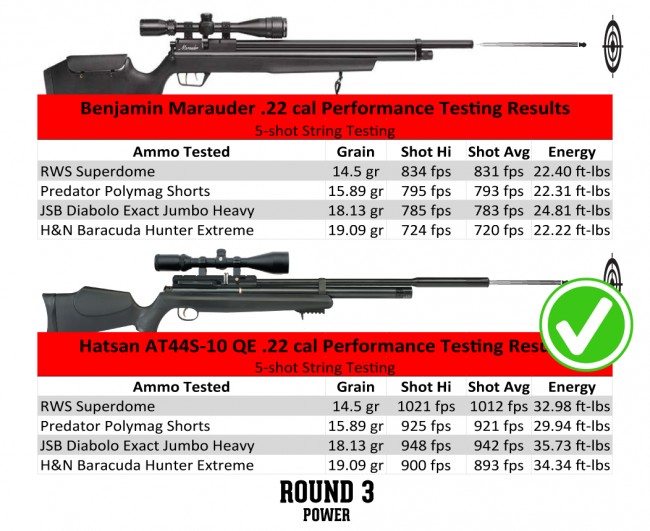 Winner: The AT44 wins this round handily, with so much power it’s easy to see why the Hatsan AT44S-10 is a favorite of airgun hunters. The AT44 gives you a lot of knockdown power to make clean kills on game from distances out to 70 yards.

For our accuracy testing we ran the same pellet selection as the power tests and shot 5 round groups at 50 yards. The Marauder was topped with a Centerpoint 4-16×40 AO scope (the scope that comes with the Marauder Premium Combo)  and the Hatsan with the Leapers UTG 3-9×50 AO scope. Both rifles shot very respectable groups however the Hatsan was a bit more picky when it came to pellet selection. The Marauder seemed to really love the Polymag Shorts which left a group under 1 inch that looked like one ragged hole. The Hatsan AT44’s favorite pellets where the JSB Diabolo Exact Jumbo Heavy that gave us a group measuring about 1.2 inches center to center.

Winner: In the end the Marauder held on in this round and retains its dominance as an extremely accurate rifle. The Hatsan did really well, and with the extra power it makes we will have to revisit this round for sure to push both rifles out to 100 yards and see if the extra FPS from the AT44 plays a factor in long range accuracy, but that will have to wait for a less windy day…

Both guns are known for how quiet they can be and with both featuring sound suppression technology we had to see which one was the quietest. With its shrouded barrel and polymer baffle system the Marauder was whisper quiet at just 68 dB. The AT44 features Hatsans Quiet Energy system that uses polymer baffles lined with cotton fabric to deaden the noise. The Hatsan registered  64 dB, beating out the Marauder and becoming one of the quietest air guns that we have ever tested.

Winner: While both guns are extremely quiet, evidently a little cotton fabric goes a way as the Hatsan AT44s-10 edges out the Marauder and wins this round.

And that’s it folks! Punches have been exchanges, these two competitors have really gone toe to toe, and the score cards have to be added up for the judges to declare a winner. In a surprising underdog victory the Hatsan AT44S10-QE wins the matchup and becomes our new PCP Super Middleweight champ.  We really thought that if anyone could unseat the dominant Marauder, the AT44 would be the one to do it. With its added power, super quiet sound suppression technology, premium features, and its smooth cycling action; the Hatsan AT44 series is a great entry level air rifle and a lot of gun for the price tag. One qualm that many have had with Hatsan in the past was the quality control of their product, but judging by the guns that we have received lately, Hatsan seems to have addressed the issue. An added advantage of purchasing from Airgun Depot is our 30 day return policy. So in the event that you receive a rifle that is not up to your standards, feel free to send it back for a no hassle exchange! 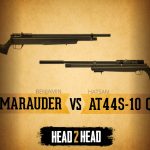 This is the fight that everyone has been asking for in the popular PCP Super Middleweight division. It’s the reigning champ again in the ring as more and more contenders enter the market vying for the belt as the best high value PCP in the sub $600 price range. What are we waiting for!? Let’s […]