This week is a title match between two middle heavy weights from the world of quality european made spring air rifles. Both well known and popular within the sport of Field Target, it’s not often that we match up two guns that are nearly identical in every way.

In the blue corner, weighing in at 9.7 lbs, hailing from the southern shores of England, the reigning champ Air Arms TX200 MKIII. The TX200 has become world renowned as a world class Field Target gun or a great small game hunter. Available in either beech or walnut and with a right or left hand specific stock. The Air Arms motto is “only the finest” and that certainly shows with a quality rifle. It’s hard not to call the TX200 MKIII the winner almost by default.

In the red corner, the German contender, the Walther LGU Master. Weighing in at 9.4 lbs, this new rifle has the muscle of one of the most famous German arms manufacturers. Over 100 years of breakthroughs and success is behind this quality spring air rifle. And one can’t help but notice the stark closeness between the LGU and the TX200. With so much similarity between the guns is there really any difference that sets one apart over the other?

Accuracy is a primary factor in what makes a great field target gun, and was an easy choice for round one. Both guns were tested at the .22 caliber. Since both of these guns are popular field target guns we decided to test them at 35 yards as an intermediate distance between 10 – 55 yards per Field Target rules. Pellets tested where H&N Field Target Trophys (14.66 gr), H&N Silverpoints (17.13 gr), JSB Jumbo Heavy Diabolos (18.13 gr), and Barracuda Hunter Extreme (19.09 gr). Five shots from each rifle were fired and each rifle was equipped with a Hawke Sidewinder 4-16×50 AO Scope.

Winner: Both of these guns are very accurate, far more accurate than what we are capable of shooting. Though we did have a few flyers on some targets, overall we were blown away with the accuracy of both rifles. We’re going to say that the the LGU edged out the TX200 slightly on this one so it takes the round.

Both the LGU Master and the TX200 feature triggers that are exactly what to look for in an airgun, or really any gun for that matter. Both guns feature a 2 stage adjustable trigger with a very light and smooth fist stage and a crisp break with little overtravel on the second stage. We set the triggers up at 2.5 lbs each for the tests, adjustments where simple and shooting both guns was really a joy.

Winner: This one has to go to the TX200 simply because the feel of the wider trigger blade as well as the metal construction gave an added bit of quality as well as a greater control on trigger surface.

With as much as the LGU Master goes for it’s surprising that it has a plastic trigger on the Walther. With some research we found that the LGU’s that are sold in Europe actually do have a metal trigger and trigger guard but due to the drop testing that is required on all airguns imported into the US, the European triggers must be changed out to the US spec plastic ones in order to pass the tests required for importations. Surely it would be a relatively easy fix to make the original metal LGU triggers work but until that happens this round goes to the TX200.

The quality of the bluing on the TX200 is exceptional, it is one of the nicest finishes on an air rifle that we have seen. The bluing has a deep polished finish that is very nice to look at. The stock features fish scale type checkering on both the pistol grip and the forend. Out of the box there was a bit of play in the fitment of the stock to the barreled action, we tighten it up but over time and after shooting it worked its way loose again. Not sure if this is a common issue with the TX200 MKIII or just this particular rifle, but either way it is a very nice heirloom quality rifle.

The LGU has a bit more “plane jane” look. The finish on the metal is adequate but is not really special. The wood stock is very nice and the fact that it is ambidextrous is very nice, especially for the southpaws. The checkering on the LGU is standard laser cut checkering as well as the Walther logo that is emblazoned on the stock, but what sets the LGU apart in its own right is how solid it is. There was absolutely no play in the fitment of the stock or any of the parts on the rifle. It had a very stout feel and you can tell that the LGU is a quality built gun.

Winner: The judges are calling this round a draw mostly due to the loose stock on the TX200. If it where not in the equation, it would be a definite winner. In reality both the Air Arms TX200 MKIII and the Walther LGU are really well made and the subtle differences that will appeal to different users.

Both of these guns are hefty. Normally not what you are looking for in a rifle. However the weight of the LGU and the TX200 MKIII actually works with you to achieve the best shot possible, especially when shooting off hand. Both the rifles weigh in at just over 9 lbs and both of are balanced really well. The key is to arrange yourself into a nice standing position with your support hand fairly close to the trigger guard and let the gun really settle in. You’ll find that once you find the natural pause in breathing, both rifles became perfectly still and stacking pellets became no problem at all.

Winner: Looks like the judges are calling this round another draw. As they both seem to be going toe to toe in these areas.

Both the LGU and the TX200 are baffled and shrouded guns. You would not think so by looking at them, especially the TX200 since it uses very small baffles, but both of these rifles are really back yard friendly. The TX200 MKIII came in at an average of 71dB and the LGU at an average of 70dB. Such a small difference means nothing and clearly both rifles are perfectly serviceable for shooting in the backyard or indoors.

Winner: Judges are starting to look at each other as this is another draw and they seem to have trouble remembering which gun is which. The similarities are just staggering!

Time to separate the chaff from the wheat, as a slight difference in the amount of effort it requires to cock a gun might seem like a little thing, but when spending a day shooting through a whole tin of pellets or more its nice to save a few pounds when loading the rifle.

Winner: The TX200 cocks at a very smooth 27 lbs. The LGU is just as smooth but requires 37 lbs of effort to cock the rifle. No were close to a knockout blow that Air Arms is hoping for, but enough for the Judges to give this round to the TX200 MKIII.

Both competitors are starting to tire as this is turning into a long drawn evenly matched fight. This is an interesting category as it’s one that we have noticed more and more as we test so many different guns. The reality is that different guns will shoot the different pellets better and worse, but what’s interesting is sometimes a gun can be a picky eater and only like a few pellets while others seem to shoot well no matter what is crammed in the barrel.

Winner: In this case the LGU ate everything I could feed it. Point of impact (POI) shift was minimal and quite predictable from pellet to pellet. The TX200 on the other hand was a bit more picky and we saw groups open up somewhat with other pellets tested as well as some substantial POI shifts. For that reason the Walther LGU wins the round.

Note that both guns seemed to like the JSB Diabolos as well as the H&N Field Target Trophy. But the TX200 had some odd POI shift with the H&N Silvertips and didn’t seem to like the Barracuda Hunters as well. After the initial testing we decided to run some Predator Polymags through both guns just to see how they did. The Polymag is kind of a litmus pellet for us. Meaning that some guns love it and others absolutely hate it. In this case both shot it fairly well and they would make a decent choice for field work and dispatching critters.

Head to Head winner: It was a hard fought bout between two excellent specimens both at the top of their class. No knockout blows were dealt here though, and looking at the scorecard, the judges are going to have to call this a draw, meaning that the Air Arms can retain it’s championship belt, but only technically.

Really the choice of gun from these two really comes down to preference and what the end user is looking for. If you just prefer shear performance over finish and look, pick up the Walther LGU (and save a little bit of money over the TX200 MKIII at the same time). But if would rather have something with a heirloom quality that stands out from the mundane, pick up the Air Arms TX200 MKIII. Your milage may vary, and neither of these rifles are a bad choice when looking for a well built underlever springer. 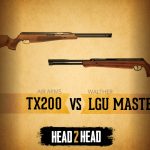 This week is a title match between two middle heavy weights from the world of quality european made spring air rifles. Both well known and popular within the sport of Field Target, it’s not often that we match up two guns that are nearly identical in every way. In the blue corner, weighing in at […]