Semi-auto CO2  plinkers are some of our favorite airguns. Always ready for some quick plinking indoors or out, plus the fast action and close resemblance to their powder burner counterparts make them a great way to keep skills sharp at fraction of the price of going to the range. But what difference is there, if any between some of the most popular CO2 repeaters on the market? Is one better than the other when it comes to power, accuracy, and design? It’s time to find out in another Head to Head, this time featuring the Semi-Auto CO2 Bantamweight Division!

In the Blue corner, with design cues from its Italian parent company, and made in Germany, we have the Beretta CX-4 Storm Air Rifle. Weighing in at 5.25 lbs this lightweight and ergonomic carbine has been a favorite of backyard shooters for some time. This firearm replica was originally released way back in 2007. Featuring integrated iron sights and a full-length Picatinny top rail the CX-4 can be set up with just about any optic available. The 30 round magazine and use of 88 gram CO2 canisters ensure that you will spend plenty of time pulling the trigger and less time re-loading.

In the Red corner, the proverbial “new kid on the block” is the Sig Sauer MCX Air Rifle. Weighing in at 6.6 lbs the MCX was the Belle of the Ball at SHOT Show 2015 and after some lengthy production delays, the MCX is finally available to the public. Featuring a unique belt-fed rotary magazine design that contains 30 rounds of .177 caliber pellet ammunition, this fast shooting carbine has become a favorite of airgunners the world over. Featuring a key-mod free float style rail the MCX is ready to be customized to your heart’s content.

Let’s get these two into the ring and see who comes out on top!

The Beretta CX4 Storm airgun is highly compact and very ergonomic. Its chassis is made up of high impact polymer that is both strong and lightweight. The CX4 also includes permanently attached military style iron sights that are adjustable for both windage and elevation. The CX4 Storm also has a full-length Picatinny top rail for attaching optics though high mounts are required in order to clear the iron sights. The barrel is made up of a steel inner barrel shrouded in a blued steel sleeve. The CX4 also features a cross bolt safety that completely disables the trigger however the placement of the safety is a bit awkward and cannot easily be manipulated with one hand. Similarly, the magazine release is oddly placed on the side making it a stretch to reach with the thumb and easier to operate with the support hand if trying to change mags quickly.

The Sig MCX airgun will feel right at home to anyone with experience with modern sporting rifles such as the AR15. The MCX’s receiver, trigger, and controls are all made of metal and feel very realistic. The stock, which also houses the 88 gram CO2 canister, as well as the KeyMod free-float style rail are made of polymer. Though this serves to keep the overall price of the MCX down we have seen a few instances of the polymer stocks cracking under harder use. The MCX comes equipped with either iron sights, a 1-4 power scope, or a  red dot sight depending on which version you purchase. The barrel of the MCX, similar to the CX4, is a steel inner barrel covered by an outer sleeve, the MCX however features a mock, non-functioning, suppressor which the barrel runs inside of.

Winner: Though the MCX is, in my opinion, more comfortable and easier to operate, the failing in the design of the stock and the cracks that we have seen occur render it useless if that should happen. The CX4 takes this round due to its much more durable construction.

The CX-4 Storm features a 2 stage, non-adjustable trigger. The first stage pull is light and smooth but the second stage breaks fairly heavy. It is a perfectly serviceable trigger for plinking but some may find it a bit too heavy for real accuracy work. When tested with our Lyman trigger pull scale it pulled a consistent and hefty 10 lbs 10 oz. The trigger on the MCX is also 2 stage non-adjustable however there are a few differences. The first stage pull is quite a bit heavier, this is largely because the first stage pull is actually advancing the belt in the magazine, rotating the next pellet into firing position. The second stage break is lighter than that of the CX4 and the trigger pulled at 9 lbs 7 oz. on the Lyman gauge.

Winner: The Sig Sauer MCX takes this round, but realistically neither of these triggers are what you would expect for doing any type of precision shooting.

Both of the guns use fairly unique and innovative magazine designs, and they both provide very different answers to the problem of how to get 30 rounds of .177 pellet ammunition to feed reliably in an air rifle. Both use a belt system to hold the pellets and feed them into firing position. The CX4 uses a magazine that looks very similar to other pellet magazines however instead of a rotary wheel the Beretta CX4 uses a continuous belt that moves around the outside of the magazine. This design makes loading the magazine very fast and very simple. However, it is somewhat of a fragile system and since it is on the outside of the magazine it’s susceptible to dirt and debris interfering with the belt.  Similarly, the MCX magazine also uses a belt, however it is housed internally in the magazine. In order to load it the belt is removed completely from the magazine, the pellets can then be pressed into the belt and the belt is loaded back into the magazine. This process is slower than that of the CX4 however it can be sped up by laying the belt on a table and pressing in the pellets with both hands. It’s also a closed system so there is far less chance of dirt or debris getting into spare magazines as they are being carried.

Winner: Though both of these designs are really well thought out and both work well, we have to give this one to the CX-4. The CX-4 magazines are so much easier to load and with the belts being permanently attached it also means less chance of them getting lost. The only downside is that carrying extra magazines isn’t very easy or cool looking!

For this test we fired 10 shots across a chronograph using Crosman Premier Ultra Magnum 10.5 grain pellets. Shots were fired at a rate of about 1 every second to see if there were any significant changes in velocity over the range. We got the following results: 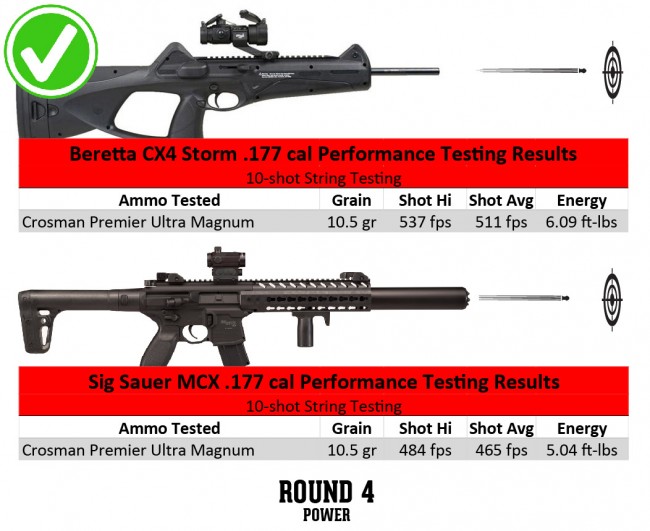 Winner: The Beretta CX-4 just edges the Sig MCX here on power. Though these are both plinking guns (we do not recommend them for hunting!) the CX-4 with just that extra bit of velocity is enough for the judges to call this one in its favor.

Using the Crossman 10.5 grain pellets again,  we patterned these guns at 25 yards firing 10 shot groups with each. We only used iron sights for this test as we wanted to best simulate what kind of accuracy someone who just bought these rifle would expect straight out of the box. We realize that many airguns are picky and that testing different pellets to find which is most accurate is usually key, but again, we are trying to replicate what someone who just bought one of these guns can expect when they get them home and take them right out of the box for some shooting.

Winner: The MCX is the clear winner here, we think a lot of this has to do with the much better sight picture present on the MCX. The CX4 is just a simple post and aperture sight making it hard to keep centered in the exact spot every time.

Conclusion: It was a hard fought match as for most of these tests the two contenders were neck and neck. Really, it makes sense that the two would be so similar in many aspects as most CO2 repeating carbines are very similar in construction but the Beretta CX-4 Storm just barely comes out on top here. The only caveat would be that the Sig Sauer MCX air gun is both more accurate, as well as being priced lower which certainly wins a lot of people over. Really we think that most shooters would be happy with either of these guns for some backyard fun, but if power and durability are your #1 concerns, the CX4 may just be the gun for you. 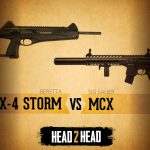 Semi-auto CO2  plinkers are some of our favorite airguns. Always ready for some quick plinking indoors or out, plus the fast action and close resemblance to their powder burner counterparts make them a great way to keep skills sharp at fraction of the price of going to the range. But what difference is there, if […]