Today we are matching up two CO2 blowback pistols that are fairly new to the market and that are designed with training in mind. These guns give you the look and feel of their powder burning counterparts, but is one inherently better than the other? Let’s throw them in the ring and find out!

In the red corner, all the way from Taiwan, we have the Smith and Wesson M&P 40 Blowback from Umarex. Though the M&P 40 has been around for some time as a non-blowback model this new version features not only blowback action but interchangeable back straps, a metal slide, drop free magazine and 3 dot sights. This excellent re-creation of the M&P’s powder burning brother is the perfect companion pistol for your home defense gun if you’re looking for a way to practice on the cheap.

In the blue corner we have a gun that closely mimics the characteristics of popular Austrian handguns. The ISSC M-22 is as close as it comes when compared to the grip angle, size, and sight picture of some of the most common handguns used by police, militaries and civilians the world over. Is the ISSC as close to “perfection” as you can get in an airgun?

Round  One: Overall Construction

Pick up the M&P40 blowback BB pistol from Umarex and you would be hard pressed to not think it was the real firearm. The folks at Umarex really knocked this one out of the park when they put together this blowback version. Every detail of the original firearm is there. The polymer frame is a dead ringer for the real thing, The grip panels feature the same feel and texturing as the real firearm as well as the same interchangeable backstrap system that allows the shooter to custom fit the pistol to their hand. The M&P40 ships with 3 different sized grips so you can get the exact feel you are looking for. All of the controls on the M&P40 are functional, the safety, mag release, slide stop, take down lever and trigger safety all function. The pistol can easily be disassembled for cleaning or maintenance which makes it a great tool for teaching younger shooters how to properly care for a firearm.

The ISSC M-22 BB pistol is a bit more simplistic in its approach. There are many facets of the ISSC that are spot on, such as the grip angle, the trigger blade safety and the magazine and slide release, however there are a few things that the ISSC somewhat misses the mark on. Though the grip angle is correct, the contour of the grip is somewhat off as well as the texturing. The ISSC feels more like a toy than the M&P and its polymer frame is clunkier and not as authentic feeling as the M&P. The takedown levers, while present on the ISSC are non-functioning as well as the molded selector switch on the slide.

Winner: Overall the ISSC is close enough to the real thing to provide an adequate training platform but it just different enough that some may find the ISSC un-familiar in their hands. On the other hand the M&P 40 is one of the accurately replicated guns we have seen. This one goes to the M&P hands down, it’s really no contest in this category.

The ISSC features a double/single action pull, meaning that when firing the first shot the trigger pull is actually cocking and releasing the hammer. After the first shot is fired then the hammer is reset by the slide and the trigger is then single action, however this is not 100% the case with the ISSC as the trigger pull is also being used to actuate the carrier that moves the BB from the magazine into the chamber of the pistol. This results in a heavier trigger pull regardless of whether it was in double or single action mode. In double action the ISSC pulled at 6 lbs 12 oz and in single it still pulled around 5 lbs. Because the trigger has to be fully pulled and released after each shot to load the next round, firing the M-22 was a bit slow with split times from shot to shot averaging .23, which is just over 4 rounds per second.

Continuing in the same direction as its phenomenal construction, the M&P 40’s trigger is just as good. The trigger feels very similar to the trigger on its striker fired big brother. It pulls very light through the first stage and breaks soft through the second stage. On our Lyman trigger pull scale the M&P pulled at an average of 3 lbs 13 oz which is perfectly serviceable for this type of pistol. One of our favorite parts about the M&P’s trigger is that the pull of the trigger is a true single action, its only operation is to release the hammer and therefore you can shoot off the trigger reset allowing for some really fast shooting. Using a shot timer and shooting only for speed and not accuracy our test shooter was able to achieve average split times of .17, that’s almost 6 rounds in a second.

Winner: The trigger is just so good that the M&P 40 easily takes this round! The M&P is fast, and with the added benefit of a realistic trigger pull and reset the M&P fills its role as a training pistol really well.

Round 3: Shots Per Fill

This test is a pretty easy one, gas up both guns and run BB’s through them until they will no longer cycle on their own. In order to prevent freezing we alternated between the two guns to allow them to thaw out a little between magazines. Being that both of these guns are blowback and that they both feature fairly heavy slides the round counts were somewhat lower than what you would expect with non blowback guns. The M-22 also visibly used more gas as we could see it when it escaped from both the barrel and the mock ejection port upon firing. We were able to fire 67 shots out of the M&P (about 4 and ½, 15 round magazines) and we got 56 shots out of the M-22 ( just over 3, 18 round magazines) using one 12 gram CO2 cartridge.

Winner: The M&P takes it again but only just barely. There are many factors such as outside temperature, the starting pressure in the CO2 cartridge, as well as gas escaping during installation of the cartridge, so on any other day this test could go either way.

For this round we fired 10 shots across our Chronograph using new CO2 cylinders in both guns. Both guns were loaded with Daisy Premium Zinc BB’s. Keeping in mind CO2 pistols don’t have a lot of speed together, a CO2 pistol with higher speeds will help the shooters ability to shoot for accuracy at longer distances. So with that in mind let’s take a look at the chrony numbers:

Winner: The M-22 in a last ditch effort takes this round! Though it did have a bit more variance from shot to shot the M-22 made on average about 70 fps more than the M&P. This explains why the M-22 got so many fewer shots per fill in the previous test. It may be a bit of a gas hog, but it makes up for it in speed.

Though both of these guns are smooth bore BB pistols and accuracy is really a nominal category here we couldn’t let this head to head go without seeing how they shot. We fired 15 shots from each pistol, both with fresh CO2 and both were fired from a rested position, using a sandbag, at a target that was set at 10 yards from the shooter. We were pretty surprised with the results as we really expected this to be a tie.

Winner: The trigger pull really came into play here as it was much harder to keep the M-22 on target while trying to manage its heavy trigger pull. The M&P takes it again as we were pleasantly surprised at the accuracy. This is certainly one of the more accurate BB pistols we have tested.

Conclusion: The M&P takes the belt in what was a pretty one-sided victory. Umarex really did a great job on the M&P 40 air pistol, we think it will quickly become a staple in the CO2 blowback pistol game and hopefully other manufacturers can take a few cues from Umarex. Airgunners want replicas that are as close to the real deal as possible, and the M&P40 from Umarex is a perfect example. If you are looking for an inexpensive way to keep your skills sharp without the trip to the range, replica air pistols, like the M&P40, are a great way to do it!

As always your comments and questions are appreciated, let us know what you think about the M&P40 and the ISSC M-22. 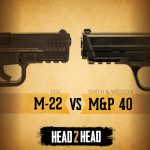 Today we are matching up two CO2 blowback pistols that are fairly new to the market and that are designed with training in mind. These guns give you the look and feel of their powder burning counterparts, but is one inherently better than the other? Let’s throw them in the ring and find out! In […]