A European bullpup confrontation in our Middleweight Bullpup Division

Bullpups have been all the rage in the airgun world for the last few years and really, what’s not to love? Bullpups are compact, quick handling, easy to manage both in the field and on the range, and the same level of accuracy as a full-length sporter stock rifle. It’s easy to see why a bullpup configuration is preferred by so many shooters. We thought we’d put in the Airgun Depot Head to Head Ring two of our newly added manufacturers. Two high-end, made in Europe rifles in the hefty .25 caliber, that epitomize everything that it means to be a bullpup rifle. Without further ado, let’s meet our competitors in this Middleweight Bullpup Division:

In the red corner, weighing in at 8.1 lbs, hailing from far off Russia we have the Ataman M2R Bullpup. Ataman airguns are fairly new to the US market having only been around for about a year now, but they brought some much-needed variety to the high-end air rifle market. The M2R is extremely compact, well built, and combines many features that airgunners love to give the shooter in a package that is both rugged as it is good-looking. Will this newcomer live up to the hype? We are excited to see as this is one of our first full tests with an Ataman rifle.

In the blue corner, weighing in at 8.4 lbs is an updated version of one of the most shot bullpup air rifles the world over. From its home in Sweden, we have the FX Bobcat MKII. FX Airguns, new to Airgun Depot as of late 2016, combine innovation with expert craftsmanship to make a truly amazing performance rifle. The MKII builds upon the original Bobcat design by adding improved internals, a competition tuned regulator, dual pressure gauges, and an improved cocking handle. Can these improvements help it keep its place at the top of the bullpup arena? Let’s get our competitors in the ring and see who comes out on top.

The Ataman M2R Bullpup is really a well put together air rifle. The folks over at Ataman really spared no expense to make this rifle a well-built piece of machinery. The M2R features either a Walnut or black soft touch stock, our test version came in Walnut and it looked absolutely spectacular with its laser etched checking. The fit and finish are spot on as well; no hard edges, no streaky finish, just a beautifully put together gun. The metal came finished in a deep black anodizing on all surfaces that give a durable, nonreflective finish. This gun is put together like a custom 1911 with no slop or corner cutting measures. Ataman really did a great job and the M2R would be at home in any collection of high-end air guns. Ergonomically the M2R Bullpup is a bit on the awkward side. The length of pull is very short and while this adds to the overall compactness it also makes shooting a bit awkward especially when shooting from the prone or rested. The other feature our shooters found somewhat awkward was the placement of the cheek rest and magazine. The magazine itself fits right in the middle of the cheek rest. This means that you either have to position your head farther back or farther forward in order to clear the magazine so it can function properly. We found this to be a major detriment when mounting scopes as we had to use an offset mount to push the optic forward enough to allow for proper eye relief as well as a cheek weld that will not interfere with the magazine.

The Bobcat is just as well made as its Russian competitor, but with a few key differences that set it apart. The Bobcat comes as an all-weather synthetic stock only (no wood for this gun as it was designed with the field in mind). The stock itself is very ergonomic with molded finger grooves, a wide flat forend with a squared off section if you’d like to add an aftermarket picatinny rail for mounting a bipod. The length of pull is much more generous than that of the Ataman making it much more accommodating for adult size shooters. The butt pad is also adjustable along a track within the stock so that a perfect cheek weld can be achieved. The magazine is placed far enough forward as to be out of the shooters way allowing for a natural and steady shooting position. There’s also the ability to store an additional magazine in the butt stock. Metal surfaces are finished in black and there were no noticeable defects in the finish. Though somewhat of a more utilitarian design the FX Bobcat MKII is a very well thought out gun built to exacting standards.

Winner: The little details just seem to add up as the FX Bobcat takes round one. Great construction, quality materials, and ergonomics that are very well thought out make it stand out this round. About the only thing we could think of to improve on the Bobcat is to include a pic rail for a bipod and switch out the top dovetail rail for a picatinny as well (but that’s just a personal preference of pic rails over dovetail).

The Ataman trigger is, in our opinion, its greatest downfall. Remember we are reviewing these guns in out of the box condition, we make no adjustments to the regulators, triggers, etc for our tests. Out of the box, the Ataman bullpup has one of the strangest airgun triggers we have encountered yet. The Ataman ships with zero second stage dialed into the trigger, it’s just a long, spongy single stage trigger. Though the trigger is very light (our test trigger pulled under a pound at 14.2 oz), the lack of a second stage made accurate shooting trickier than it should have been with this gun. Staging the trigger before the shot was nearly impossible making the gun hard to settle into a rhythm behind. The unpredictability made it a challenge to time breathing and making sure shot placement was precise.

The FX Bobcat, on the other hand, features one of the best bullpup triggers that we have ever shot. This near perfect 2 stage trigger setup is unique in that it uses a magnetic bearing linkage system that gets rid of the common problems associated with bullpup triggers. The Bobcat’s trigger out of the box came set with a short first stage and a crisp 1 lb 2 oz break on the second stage. Triggers like the one on the Bobcat that are this good out of the box are few and far between and we really loved shooting this one!

Round Winner: This one is an obvious choice, the FX Bobcat takes it hands down.

For our accuracy test, we mounted up a Hawke scope on each rifle, sighted them both in with 25.39 grain .25 caliber JSB pellets and headed to our 50 yard indoor range. All groups were fired from a rest. Each group was 12 shots. The Ataman performed well although the trigger did make it hard at times. The combination of the M2R trigger being so light along with the single stage meant that at times the trigger was tripped while staging the shot resulting in some pulled shots. Overall the Ataman shot well and printed a group of about 2 inches with ease. That group could have been tightened up a bit if the trigger had been adjusted somewhat. The Bobcat, in true FX fashion, dropped a group well under an inch at 50 yards. The Bobcat, like all modern FX air rifles, comes equipped with the FX Smooth Twist Barrel rifling system that allows for maximum velocities, decreased friction in the barrel and better all around ballistics. We really enjoyed watching the Bobcat stack pellet after pellet in the same hole.

Winner: The FX Bobcat is really running away with things here, this is starting to become a very one-sided match.

For this test, we filled both rifles to 250 bar and fired a series of 20 shots over our chronograph (a Master Chrony Alpha chronograph) using the same JSB 25.39 grain pellets. Both guns made really good power with the Ataman averaging 896.85 fps and the Bobcat averaging 943.10. These velocities resulted in average ft/lbs readings of 45.36 for the M2R Bullpup and 50.17 for the Bobcat. We should also mention that the .25 caliber Bobcat has two power settings (lower calibers have three settings). For this test, it was set to high. We did fire a few shot on low just to see what the difference was and the velocity dropped to about 650 fps (a great option for putting in target practice to extend your shot count between fills). The Bobcat was not only more powerful but more consistent across the whole shot string with a standard deviation of just 3.96 fps across the whole 20 shot test range. This can be attributed to the FX Bobcat being equipped with an on-board regulator from the factory that really helps flatten out those shot curves. 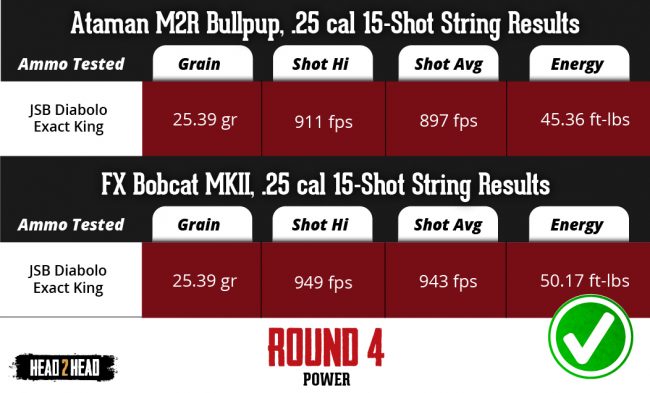 Winner: The Bobcat is squarely in the lead now, really the judges should call the fight at this round, but looks like they’re going to let it go another round.

Though airguns are usually much quieter than their powder burning counterparts, we alway want to test for that “backyard friendly” factor. When it comes to bark, the Ataman has it. Thought it looks like the muzzle is threaded for a proprietary sound moderator, our test model did not come with one. It metered out at just under 88 dB making the gun hearing safe but not something you would want to fire in an urban area necessarily.

The Bobcat, on the other hand, came equipped with the FX stackable baffle moderator system. This system lets you add or subtract baffles so that the shooter can adjust overall length/amount of sound suppression. Out of the box, our test gun had two baffles installed. Just those made a big difference metering at 74.9 dB in out test. The tone of the Bobcat was also much lower and our shooters agreed that this gun would be safe to fire in a backyard noise wise.

Winner: The FX Bobcat again, a moderator that allows you to custom tune the sound of your rifle is hard to beat, but we can’t help but wonder if the Attaman had the available moderator where it would stack up.

Head to Head Winner: Well it looks like it was hands down a knockout victory for the FX Bobcat MKII. We didn’t even get to the round covering shot count (which the Bobcat would have easily won as well with its 480cc air cylinder and built-in regulator). Realistically these guns are a much closer match than the results showed, and the Ataman M2R Bullpup could easily be just as good in some of these categories with a little adjustment. As always we think it comes down to the end user, if you like to adjust your gun and don’t mind the setup time then the Ataman M2R Bullpup is a great gun, but for all around out of the box performance the FX Bobcat wins every time, and that’s why it is the knockout champ of today’s head to head! 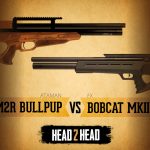 Bullpups have been all the rage in the airgun world for the last few years and really, what’s not to love? Bullpups are compact, quick handling, easy to manage both in the field and on the range, and the same level of accuracy as a full-length sporter stock rifle. It’s easy to see why a […]