It's a Turkish throw-down in the Light Middleweight Bullpup Division

It’s not every day that we get to do a head to head between two guns from the same country of origin, it’s almost like a mini National Championship! Fitting with it being March Madness and all, so let’s jump in the ring and meet our two competitors.

In the red corner is our reigning champion, from far off Turkey comes the Hatsan BullBoss. This awesome little bullpup weighs in at just over 9.5 lbs and has really become one of our favorites in the bullpup category. Being touted as the “everything that you need and nothing that you don’t” bullpup, we here at Airgun Depot have really come to enjoy this gun. It offers shooters a well balanced, compact, and highly accurate platform at a very reasonable price. But can its previous merits be enough to hold strong against the competition? Let’s meet our contender and find out.

In the Blue corner weighing in at 7.5 lbs, also hailing from Turkey, is the Kral Puncher Breaker Silent. This rifle is a bit of a newcomer for us but has already shown some promise as being a great rifle. Lightweight, fully shrouded and what seems to be a great trigger makes this compact bullpup a real challenge for the competition. Let’s get them both in the ring and see who comes out on top

Round One: Construction and Ergonomics

Taking a closer look at the Hatsan Bullboss it’s easy to see why after only being on the market about a year, this gun really has become a favorite among air gunners. The simple, no-frills construction is perfect for a gun that is going to see all kinds of use in both the hunting blind and at the range. The bullpup stock is comfortable for both left and right handed shooters, and with the addition of an adjustable cheek riser, the BullBoss can be fitted to just about any shooter. Another feature that we found to be advantageous to both left and right handed shooters is the cocking lever location. Hatsan has placed the cocking lever forward of the rest of the action. This allows both right and left handed shooters to cycle the rifle without having to break their sight picture, and makes for very fast follow-up shots. The length of pull is a tad on the short side, but that is common with bullpup guns. The Hatsan BullBoss balances out very nicely with most of the weight to the rear of the gun which makes it very quick pointing in the shoulder.

Construction of the BullBoss is on par with what we have come to expect from Hatsan. The black polymer stock appears to be injection molded and then coated with a soft touch coating. It shows a few finishing marks here and there, but for the most part is devoid of any major defect. We found the soft touch finish to provide a nice, grippy texture to the rifle. All metals appear to be finished in black oxide which also provides a good measure of weather protection. Overall the Hatsan BullBoss is a rugged package that makes a perfect all-around utility air rifle.

Right off the bat, the Kral Puncher Breaker stands out for its compact size. The Puncher Breaker would make a great choice for someone looking for a gun to keep in the car or truck, or even as a backpack gun. The synthetic stock is comfortable in the hand but maybe just a touch on the plasticky side. The pistol grip is ambidextrous, however, the cocking lever location may be uncomfortable for left-handed shooters. The Puncher also features a moveable action cover/cheek rest that can be adjusted forward and back to best fit the shooter. The Kral comes with an accessory screw on Picatinny rail that must be installed on the forend (unlike the Hatsan which is molded into the stock). On our test gun, the screw was too long. Because of this the rail remained loose and had some wiggle until we were able to slightly grind down the screw and fully tighten the rail. The length of pull on the Kral is short, very short to be honest, some shooters with longer arms may find the Kral a little too small.

Build quality on the Kral is a good mix of form and function. The polymer stock is well thought out and well made with texturing placed in the areas where shooters hands will be gripping the rifle. There’s even a flip-down hatch at the front of the forend to store a spare magazine. One stand out feature of the Kral guns is the finishing on their metal parts. Sure, Kral offers the same black oxide/blued finish as others, but Kral also offers a nickel marine finish that no other airgun manufacturer is offering at this point. Nickel finishes are highly weather and water resistant making the Kral a great choice for a high use airgun.

Winner: Though the Kral is a great looking gun and the nickel finish is excellent, we give round one to the Hatsan. It’s more friendly to a larger variety of shooters and the build construction seems to be just a hair better.

The BullBoss strays a bit from the Hatsan tradition here in that it does not feature the same Quattro trigger as many of its counterparts. However that does not mean that the BullBoss trigger is by any means bad, it’s just a bit less crisp than its Quattro trigger system brother. The BullBoss trigger is a 2-stage, with a first stage pull right around 1 lb and a second stage break that pulled at 4.7lbs on our scale. Not a bad trigger by any means, perfectly suited for hunting and field work.

The Kral trigger is really something else. Right out of the box the Kral’s 2-stage trigger felt crisp with a very short 1st stage that pulled at about a pound and then a second stage break at 2.57 lbs. Yep…under 3lbs out of the box. The Kral’s trigger really was a highlight of this handy little rifle.

Winner: The Kral easily takes this round, no doubts about it. This trigger is really that good. Not that the Hatsan trigger was bad, but Kral’s trigger stood out.

For this test, we shot three separate 5-shot test groups using 3 different pellets. We used our 3 favorite .22 caliber pellets, the JSB 15.89 grain Jumbo’s, JSB 18.13 grain Jumbo Heavy, and the H&N Barracuda 21.14 grain pellets. We fired each gun from a full charge at 50 yards with each of the 3 pellets on our indoor range. The full charge for each round was important since neither of these bullpups is regulated, meaning without refilling the shots may have started dropping on the later shots. We just wanted to keep things equal.

Both the Hatsan and the Kral seemed to prefer the JSB pellets over the H&N (…I mean is anyone actually surprised here?). The Kral shot an amazing group just barely over 1/4 inch with the 18.13-grain pellet and with the same pellet the Hatsan shot about 1/2 an inch. Either way, just one jagged hole in the target. Both guns shot the 15.89-grain JSB pellets into about a half inch, pretty much the same as the 18.13’s. However, with the H&N Barracuda’s groups opened up with the Hatsan shooting a little better than the Kral at about 3/4 of an inch while the Kral printed at 1 inch with one really awkward flyer. We would guess that the added weight of the H&N’s accounted for the bigger groups, but it could also be that both these Turkish rifles prefer the softer lead of JSB pellets.

Winner: We decided to call this round a tie, both these guns shot exceptionally well at our 50-yard indoor range, especially with JSB pellets. Realistically, both these guns are easily capable of sub 1-inch groups with just about any quality pellet.

Round Four: Power
For this test, we went with what has really become our golden standard for pellets in .22 caliber, the JSB 18.13 grain exact heavy pellets. The test is simple enough, charge the gun to full power (again, needed since neither gun is regulated), send 10 shots over the chrony and compare the results to see what kind of power these bullpups both produce. Take a look at the shot info in the graph below. 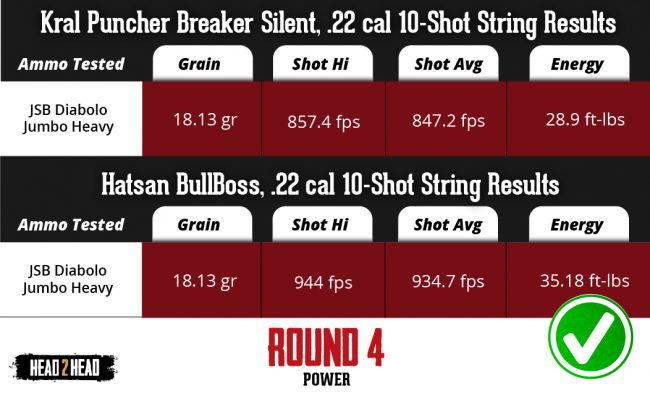 Winner: The Hatsan takes this one easily, it has the Kral beat by an average of about 100 FPS. That may not seem like much, but when you need the extra oomph for a longer shot or maybe a bigger than expected game animal, the Hatsan has the power to get it done.

Admittedly, this round is somewhat arbitrary as both guns feature sound suppression technology to make the guns extremely quiet. But we wanted to see if there were any noticeable differences in both the loudness and the tone of these two guns.

The Hatsan registered 81.4 dB on our sound meter, certainly not the quietest Hatsan that we have ever tested but still quiet enough that you aren’t going to bother the neighbors and well under the hearing safe threshold. The Kral came in at a very consistent 73 dB and had a much lower tone than the Hatsan. The Kral would have no problems with noise in a backyard or indoor shooting environment.

Winner: This one easily goes to the Kral, we have to admit that this one surprised us since Hatsan’s equipped with QE technology have consistently been some of the quietest airguns out there.

The Judges tally up the scorecard and well… it looks like this matchup is a draw! We don’t know what to say here folks, but the reality is that there’s no way we could give one gun a definitive win over the other. Sure the Hatsan has more power, but the Kral trigger is better. The Kral is a bit quieter, but the build quality of the BullBoss is that much better.

I think that a rematch is going to be the only way to settle this one. Maybe a test of each guns long range ability is in order? What are some other tests that you guys would like to see both these guns run through? Put in the comments below some further tests you’d like us to run so we can determine a clear cut winner and stay tuned to our YouTube channel as I think it’s time for us to take this fight from the page to the screen…

It’s not every day that we get to do a head to head between two guns from the same country of origin, it’s almost like a mini National Championship! Fitting with it being March Madness and all, so let’s jump in the ring and meet our two competitors. In the red corner is our reigning […]