When I was about 12 there was a pack of us guys in the neighborhood that loved to ride our bikes down to the river near our homes and shoot our airguns. Most of us had Red Ryders, Crosman 760’s, or various other guns our dads bought us from the local hardware store. My dad had bought me a Marksman 1790 Biathlon Trainer and for a while it was the coolest gun on the block, but I still remember the day my good buddy showed up with his Dad’s old Crosman 160.

We all loved that it didn’t have a spring that needed to be compressed or a chamber that needed to be pumped up, just throw in the CO2 and you where ready to go. What really stood out was the accuracy of that old rifle, it was perfect for shooting cans and bottles that we would set up on the opposite side of the river bank. We all wanted one so bad but to no avail. Crosman had long discontinued them.

Enter the Beeman QB Series of rifles. These rifles are faithful reproductions of the old Crosman 160’s, but they feature some more modern components. Being that these rifles are made overseas they are priced right, often below $100, and due to their large following they have strong aftermarket support for those who enjoy tuning and modding their guns. 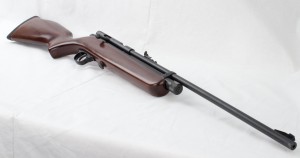 Our test rifle, straight out of the box.

First and foremost I have to talk about the quality of these guns. I’m the kind of guy that likes his guns to be made of steel and wood and the QB series fits that bill perfectly. The triggers, trigger guards, and breaches are all metal. The barrels are machined from solid steel stock and button rifled, not sleeved as many other airgun barrels.

The stocks are made of hardwood and are stained in a deep red-brown. The guns are built to last and have a timeless look and feel. 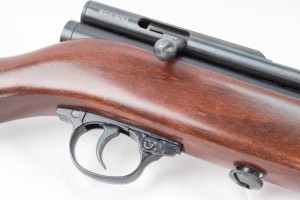 The trigger, trigger guard, breach, and bolt are all steel.

Accuracy on these rifles far exceeds their price point. For my initial accuracy testing I chose the standard QB 78 to get a good baseline for the entire line. After testing several pellets I found that my rifle liked the Crosman 7.4 grain Crosman wadcutters. With open sights at 10 meters point of impact was high and to the right but I was happy with the resulting groups, however put a scope on this gun and it really shines. In keeping with the theme of an inexpensive rifle I topped mine with a CenterPoint 3-9×32 scope and CenterPoint rings. After only a few shots to get it sighted in…well, I’ll just let the groups speak for themselves. 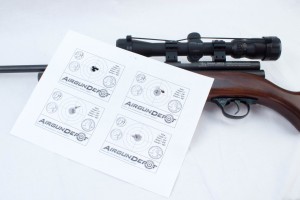 Each group of 5 shots was fired from 10 meters rested.

Simple and efficient, these rifles will provide hours of shooting fun. Any rifle in the QB series makes a great backyard gun or accuracy trainer. CO2 consumption was acceptable, I was getting about 55 to 60 good shots before accuracy started to drop off. Another benefit of the QB series being bolt action, opposed to some semi-auto competitors, is not having to worry about the gun freezing up due to sustained firing. Shot power seemed constant over the testing process however, due to issues with my chronograph, I was not able to get an average velocity across the entire range of test shots. 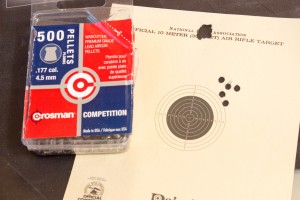 What would make it perfect

My only complaint with the construction of these rifles is the rear sight on the standard model. It’s a simple stamped notch sight that can be adjusted using the adjustment ramp. On my test model even with the sight adjusted all the way down the gun still shot about an inch to high. Again this problem was overcome by the addition of a scope, and if only used for plinking cans I think the point is invalid. However with as accurate as these rifles can be a good set of open sights is, I think, a necessity.

I also would like to point out that these are not hunting rifles.  While they are extremely accurate and I have no doubt they could be use to place good shots on game, I believe they lack the power to humanely dispatch even small game. There are a number of modifications available to add power to these rifles and they can be easily converted to PCP but even then, I would recommend a good break barrel or PCP.

One of my favorite games with accurate plinking rifles involves a cheap bag of those little suckers you get when you drive through at the bank, and a block of styrofoam. Take about 10 of the suckers, unwrap them and stick the stick end into the block of foam. Set the block of foam with the suckers down range, grab a stopwatch, and when the person timing says go try and blast the suckers as fast as you can. Its a great game for kids and its cheap to set up.

These guns are also great indoor rifles and they are fairly quiet so you should be able to shoot in your basement just fine and not disturb the rest of the house. The QB’s are great for keeping your shooting skills sharp while staying warm inside all winter.

Or you could use the QB as the platform to build the ultimate custom air rifle! There are a plethora of aftermarket parts available for these guns. From new stocks and enhanced triggers to full PCP conversions you can build to your hearts content.

No matter what your plan might be, the QB series are a great value.

Learn more about the guns featured in this post 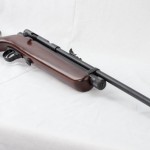 When I was about 12 there was a pack of us guys in the neighborhood that loved to ride our bikes down to the river near our homes and shoot our airguns. Most of us had Red Ryders, Crosman 760’s, or various other guns our dads bought us from the local hardware store. My dad […]