The AR-15 pattern rifles are easily my favorite family of rifles. I love the modularity and the ability to customize you get with the AR. You really can make each rifle your own. When I first stepped into the world of airguns, finding that same amount of modularity was not really available and I always wondered why, especially with airgunning becoming more and more common, some manufacture didn’t team up with a popular manufacturer of modern sporting rifles to try and tap into the AR-15 market. After a few attempts by different manufactures I’m happy to say that, in my opinion, Crosman has really hit the mark (pun intended) with the Armada PCP rifles.

The Armada is a great looking rifle that features many design cues taken from modern sporting rifles and tactical rifles. Crosman provided the internals of their popular Marauder rifle as the heart of the Armada. With proven performance and reliability it was the obvious choice. Then the designers at Crosman incorporated the Magpul M-lok rail system to create a fully modular chassis that features a 6 position stock, and AR-15 style grip frame. Whether it be bipods, flashlights, vertical grips, you name it, the Armada is the first serious air rifle that allows the end user to utilize common, off the shelf accessories without the use of adaptors or modification.

Shooting the Armada has quickly made it a favorite in my airgun arsenal. The feel of the rifle is very comfortable to any modern sporting rifle user. The 6 position collapsible stock is a great feature and allows the rifle to be correctly fit for a wide variety of shooters. For our testing I used a standard model Armada in .25 caliber. Up until recently these rifles where only available in .22 and we were lucky enough to get an early production version of the .25. The controls of the Armada are all Marauder, with the trigger on my test rifle feeling slightly shorter than that of the standard Marauder. I’m not sure if Crosman made changes to the trigger mechanism for the Armada or if it was just the particular rifle I was shooting. Accuracy was as expected and we had no problem achieving groupings under 1 inch at 50 yards. The included Center Point 4-16×56 scope is a beast, and one of the best scopes I have ever seen paired with a rifle from the factory. The clicks on the adjustment knobs are smooth and tactile making elevation and windage changes a breeze. It also features a side parallax which is really nice when shooting from prone or a rest. It allows you to keep your eye up to the optic while focusing, keeping your cheek weld and sight picture steady. The included flip of scope caps are a nice bonus and are also well made and stay closed well. The rifle also features an included Harris style bipod. I found the bipod to be somewhat flimsy when fully extended. It is a nice feature and I don’t doubt that it would be sufficient for most shooters but I do plan to upgraded it to a heavy duty bi-pod in the future.

Ascetics aren’t everything… that’s what guns that don’t look as great as the Armada will try to tell you.

The Armada is available in 2 configurations, the standard, and the Magpul Special Edition. The difference between the two being that the Magpul Edition features a Magpul M.O.E. stock and pistol grip in addition to the  M-lok front end. The standard edition uses a M4 style stock and A2 pistol grip.  The standard edition that I tested was solid but there was a bit of play in the stock and I found this to be somewhat annoying while shooting groups, however it was not enough of an issue to affect accuracy. Again these rifles are fully compatible with any stock that will fit on a mil-spec buffer tube so it can easily be changed out.

We wanted to test out this .25 cal version with some of our favorite ammo from JSB and H&N (including the new 33.95 gr King Heavy from JSB). Many have been waiting to see what velocity and accuracy this .25 cal will produce. Each of these grouping and chronograph tests were done with a full 3,000 psi fill for optimal results. The groupings were tested at 50 yards.

When it came to groupings, the Armada didn’t seem to like the JSB King Heavy pellets. They may have been just a little bit too large as some of the pellets had trouble loading when cocking, and they were more prone to fliers (possibly do to skirt damage when cocking). From what we tested the H&N Crow Magnum were the pellets we would recommend pairing with the .25 cal Armada. And coincidently they were the hardest hitting obtaining 39.1 ft-lbs of energy.

Also important to note that the Armada is very well baffled much like the Marauder. It registered anywhere between 63 – 69 decibels, or the equivalent decibel reading of a conversation between two people. You should have no problem shooting this in your backyard to hunting in areas with noise restrictions. 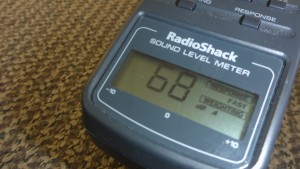 The Armada is extremely quiet, even the .25 cal version!

So why choose the Armada over the Marauder if the only real difference is cosmetic? Well, as far as performance, there really is none. Essentially you’re getting the same gun. For me the big draw of the Armada is 1st, as I have already discussed, the convenience of compatibility with AR accessories, but 2nd is that underlying “cool factor” of the Armada. This rifle just looks awesome. Its a head turner in every way. Take it to the range and I guarantee you’re going to get questions about it. The lines of the rifle remind me somewhat of the M14 EBR currently in use by U.S. forces. It screams cool, and after all, for most of us, aren’t our air rifles all about fun anyway? Why not have something that can turn a few heads and back up the bark with the awesome bite of the  Armada.

Editors Note: MAP pricing has recently been removed from the Marauder so coupons can now be applied. Also as of the date of this article, the price has recently been reduced and new calibers are now available. For more details see the Benjamin Armada page at Airgun Depot. 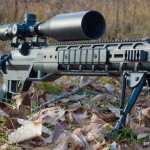 The AR-15 pattern rifles are easily my favorite family of rifles. I love the modularity and the ability to customize you get with the AR. You really can make each rifle your own. When I first stepped into the world of airguns, finding that same amount of modularity was not really available and I always […]